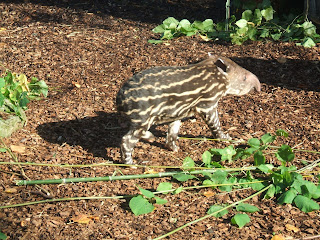 Hi all
To finish off my second year of blogging, here is a quiz for the festive season based on this years posts. The pictures may or may not have anything to do with the questions...
Most correct answers gets to do a guest post!
Answers in the New year - and a happy Christmas to you all!
Read more »
Posted by Alan at 06:57 No comments:

The last of the miscellaneous mammals in this series is our group of Southern Fur Seals, Arctocephalus australis, which is the only marine mammal species we have. Considering the number of species of pinniped alive today, comparatively few are to be seen in captivity, which reflects the expense of providing suitable feeding and accommodation for them compared to terrestrial mammals. Ours live in the section called Seal and Penguin Coasts, which is one of the newer sets of accommodation constructed in recent years.
Southern Fur seals, and other species of Arctocephalus, are much less commonly seen than Californian Sea Lions, which have over 550 listed on ISIS, and many more held privately or in non-WAZA zoos. There are only 47 A.australis listed worldwide in ISIS, with a further 122 South Africa Fur Seals A.pusillus. The only Arctocephalus listed for the US is a solitary female A.pusillus at Louisville zoo.

A common sight in the southern United States is remains of the Nine Banded Armadillo, Dasypus novemcinctus, generally flattened on roads. As armadillos are so widespread, and with a few exceptions mostly not under serious threat, there are not many to be seen in the world’s zoos. This I feel is a great pity, as they are fascinating animals with numerous peculiarities. We are lucky here at Bristol to have a breeding pair of Yellow or Six-banded Armadillos, Euphractus sexcinctus, plus a tame individual which we have in our animal displays in the summer. ISIS lists a total of 68 individuals worldwide in WAZA zoos. 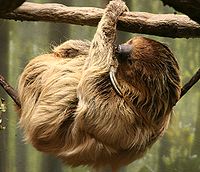 Sharing and enclosure in Twilight World with some Dourocouli monkeys are Bristol Zoo’s pair of Linne’s Two-Toed sloth, Choloepus didactylus. This is the commonest species of sloth to be seen in zoos, followed by its close relative Hoffman’s Two-toed Sloth C.hoffmanni.

Both species have multiple subspecies, and few if any in captivity are diagnosed as to which they belong to. For this reason the sloth’s in captivity are primarily display and research subjects, rather than captive breeding and reintroduction candidates. In any case, both species are widespread and are listed as of Least Concern by the IUCN.