Kicking off a new series on the various passerines we have at Bristol we begin with one of the more widely kept and exhibited of the passerines to be seen in zoos around the world, the Superb Starling Lamprotornis (formerly Spreo) superbus. Starlings on the whole make good aviary exhibits, being fairly large for passerines and many species feed on both fruit and animal matter, which makes feeding them easier. In the past supplying a variety of live insects for aviary birds, especially when they were raising young, was quite a chore, and usually expensive, but modern live food commercial companies now exist and an increasing number of insectivorous species are being bred successfully. Starlings posed less trouble than more specialised smaller passerines, as the animal part of their diet could be supplied in the form of baby mice, which were a lot easier to breed in bulk than say crickets.


Some recent visitors to the zoo will have noticed that the old prairie dog enclosure now appears to be empty. More careful (and watchful) visitors, especially at quieter times, will see that we have added a new species to the collection, a group of young European souslik, Spermophilus citellus. These in many ways resemble in their behaviour the American prairie dogs, but are much smaller, about the size of a half grown guinea pig (cavy if you are an American reader). There are actually six pairs in the enclosure for now, but with luck by next year the numbers will have considerably increased. 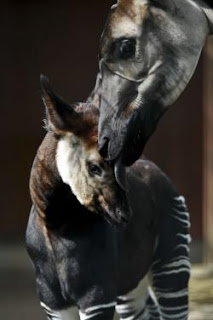 One of Bristol Zoo's signature animals is Okapi. We were the first UK zoo to hold them and also the first to breed them, and practically all of the world's captive Okapi have Bristol Zoo animlas in their family tree. We were therefore especially pleased that we now have a new addition to the zoo, with the birth of the latest calf a few week's ago. Here is the press release from t6he Bristol Zoo website,a nd the accompanying photo of the mother and calf: