Beetles and Bugs 2: Big in Japan

The Purple Jewel Beetles I wrote about last week belong to the subfamily Cetoniinae of the Scarabeidae, the scarab beetles. Related to them, but far larger (they include the largest and heaviest of all insects) are the giant Rhinoceros and Stag beetles of the related subfamily Dynastinae. Keeping beetles of all sizes is a popular hobby in Japan, and as a result a surprising number of these magnificent insects are now bred in captivity. The whole group of Rhinoceros beetles all over the world are marked by the extravagant head ornaments of the males, which use their decorations in fights over access to females. Part of the reason they are popular in Japan is that contests are staged between pet beetles like real life versions of Pokemon.

According to legend, when the great biologist JBS Haldane was once asked what his studies had taught him about God, he replied that he had an inordinate fondness for beetles. There are actually several variants of the quote, largely because JBS repeated the story on numerous occasions (it was too good to throw away). Personally, I take issue with the inordinate part, as beetles represent the largest of all insect groups and have diversified immensely in size, habitat, and lifestyle, with in all probability well over 400,000 different species. Just because people mostly ignore them (unless they eat our crops) is no reason God has to share our prejudice. 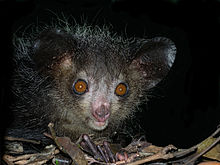 The first time I saw an Aye-Aye was at Jersey Zoo (now the Durrell Wildlife Conservation Trust). I had gone into the nocturnal house and was trying to see it clearly when it suddenly loomed up in front of me. Even though I had seen photos, I still took a step back – it is so indescribably weird looking. I am not surprised in the least that it figures prominently in Malagasy folklore as an animal of ill omen (even though it is totally harmless) – any people who had Aye-Ayes roaming their back gardens after dark would do the same.

Across the world, many different animal lineages have produced groups specialised in consuming the leaves and culms of the local forms of bamboo. Most famously of course the giant panda is a bamboo specialist, and so to a lesser extent is the red panda, but several primates have specialised in bamboo – in fact some populations of mountain gorilla feed almost exclusively on bamboo. In Madagascar a group of otherwise unremarkable lemurs have become bamboo specialists, and one population of these has gone even further and become the only known primate to specialise in feeding on water reeds. This is the Lac Alaotra Gebtle Lemur, known locally as the bandro, Hapalemur (griseus) alaotrensis.