Quest for the Wild Canary Part 4: Reptiles and Amphibians

Reptiles of various species are usually good at colonising islands, and the Canaries are home to a diverse range of endemic lizards. There are no native snakes, and at present no native land tortoises, although fossil; ones are known. It is probable that in the past various species of sea turtles also nested, but today they are only seen at sea. The most common of these is the Loggerhead Turtle, Caretta caretta, which also breeds in the Mediterranean. There are even a few reports of Leatherback Turtles beaching on some of the eastern islands, but no proof of nesting or nesting attempts.
Read more »
Posted by Alan at 10:41 No comments:

Quest for the Wild Canary Part 2: Plants and habitats

The Canaries are famous for their flowers, and although as our visit was in February there was not a great number in bloom, the endemic plants are of great interest to botanists. One might expect the plants to be the same as you would find in Spain or North Africa, but when the islands first appeared above the sea the Mediterranean did not yet exist. Instead, the western end of the ancient Tethys Ocean still separated Africa and Eurasia, and the Atlantic was much narrower. The native flora of the islands, or at least the oldest elements of it, trace their origin to the vegetation that once grew on the northern and southern shores of the Tethys, which has since been obliterated by the northward movement of Africa and India.
Read more »
Posted by Alan at 13:38 No comments:

Quest for the wild canary - part 1: Landscape and geography

The canary is such a common cage bird that I expect hardly anyone ever thinks about where they come from, and I very much doubt that the word “canary” conjures up images of large explosions or the possible devastation of much of the seaboard of the east coast of the United States. However, I hope that by the time these posts are finished, you might have a better picture of the back story of one of the commonest cage birds in the world.
Read more »
Posted by Alan at 13:18 No comments: 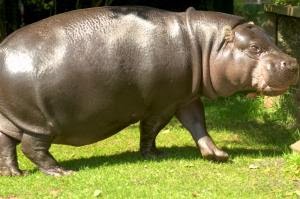 This week Bristol released the news of the first successful birth of a pigmy hippo here at Bristol for many years. Names Winnie, she has just turned 1 month old and is the daughter of Sirana and Nato.