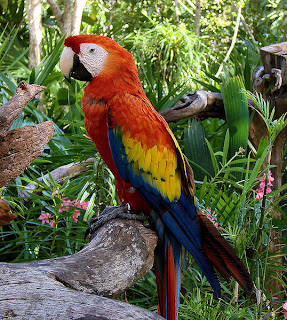 Currently Bristol has only two macaws, with only one on show. This is our male Scarlet Macaw ‘Rio’, who members of the public can meet most days in our Amazing Animlas show, where he flys free and usually circles over the audience several times. Macaws are among the most intelligent and long lived of all parrots – one Blue and Gold Macaw that is till alive today is said to be over 100 years old and is claimed to have once belonged to Winston Churchill (although this last is probably apocryphal – though it still swears at Hitler). They need their long lives because they do not have a high reproductive rate – at best they only manage to rear one or two young to independence every 3 years or so. Unfortunately, all large macaws are under high pressure from nest poaching for the pet trade, both internationally and within national boundaries, and many species are threatened. Several species were formerly found in various Caribbean islands but are now extinct. As a species, Scarlet Macaws (Ara macao) are listed as Least Concern, but the northern subspecies A.macao cyanoptera is down to perhaps as few as 1,000 individuals.
Read more »
Posted by Alan at 11:30 No comments: Links to this post

In one corner of the zoo is our Zona Brazil section, which houses various animals from one of the most highly threatened habitats in South America, the Atlantic Rainforest. This lowland coastal region has some species in common with the Amazon basin, but many are either endemic species or subspecies. Among the primates we have three of the four species of Lion Tamarin Leontopithecus here at Bristol, and I will blog about those some other time. The species I want to write about today is the other species of Amazon we hold at Bristol, our family of Red Tailed Amazons Amazona brasiliensis. 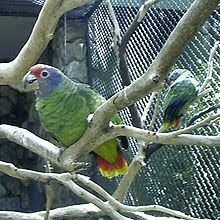 Red-Tailed Amazons are among the largest in the genus, with a length of 35cm from beak to tip of tail, and a weight of around 425g (1 pound). The plumage is almost entirely green, with the red band on the tail that gives the bird its name on the underside of the tail, and a broad yellow band at the end of the tail.
The Atlantic rainforest and its inhabitants are chiefly threatened by deforestation and other development, as the coastal regions of Brazil are the most highly populated. Their natural habitat is divided into river islands or mangrove thickets where they roost and breed, and mainland rainforest where they feed. Because of this specialised requirement, both islands and nearby forest must be preserved to conserve the species. Most of the remaining population of around 5-6,000 birds is found in Sao Paulo and Parana.
Read more »
Posted by Alan at 10:32 No comments: Links to this post

Parrots of Bristol 3: The Lilacine Amazon 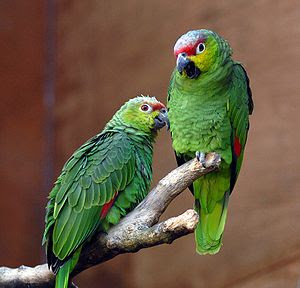 Rather tucked away in a corner of the zoo is an aviary containing our family of Lilacine Amazons, Amazona autumnalis lilacina. Currently composed of the breeding pair and three of their offspring, we have bred this species on several occasions. Incidentally, the young from previous years have been left with the parents and this did not interfere with the successful fledging of youngsters.

Read more »
Posted by Alan at 10:31 No comments: Links to this post

Close to the water play area in the middle of the zoo is our colony of Black-Cheeked lovebirds, Agapornis nigrigenis. Lovebirds have long been kept as pets, and several species are sufficiently well established that there are numerous colour varieties, but the Black-cheeked is not one of them. Until a ban was imposed some years ago, there was a trade in wild-caught birds, but this has now ceased, although some are caught for food or to protect crops.

Read more »
Posted by Alan at 09:02 No comments: Links to this post