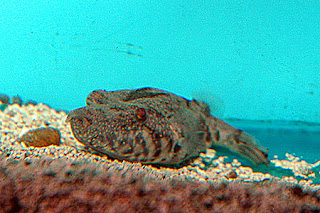 Next to the brackish water display is a tank that most of the public walk past, as it appears at first glance to be empty. This is their loss, as it actually contains two of the oddest fish we have, the Arrowhead Puffer fish Tetraodon suvattii.

Read more »
Posted by Alan at 09:07 No comments: Links to this post

The next tank along contains a selection of species from mangrove or estuarine habitats. The most distinctive of these are the Archer fish, Toxotes sp. There are at least seven different species of Toxotes, but the fish we have are probably T.jaculatrix or T.chatareus, which are the species most commonly seen in the aquarium trade.

Next door to the paddlefish aquarium is another large tank containing large fish from Asia. One of the most important species in the tank is some young Asian Dragon Fish, Scleropages formosus. They are especially significant because they are the results of what we believe to be the first breeding of this species in a public aquarium anywhere. Previous captive breeding has been in outside ponds, mostly in Asia.

Read more »
Posted by Alan at 01:37 No comments: Links to this post

A Tour through the Aquarium: American Paddlefish 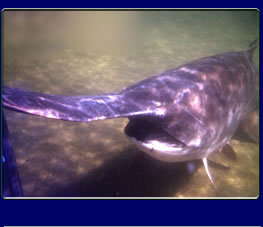 The first large tank in the Aquarium is dedicated to a variety of ‘primitive’ fishes, whose ancestors split from the ancestors of more modern fish such as perch and carp in the distant past. Still surviving today, the Chondrostean fish are characterised by a great reduction in bone and a skeleton that is mostly cartilage. They also often have a shark-like heterocercal tail, and were at one time thought to be close to the sharks. It is now plain that they are modified ray-finned fish, and the surviving forms are not necessarily even closely related to each other. We have two species at Bristol, the Sterlet (a small European species of sturgeon) and the subject of this article, the American Paddlefish Polyodon spathula.
Read more »
Posted by Alan at 02:36 1 comment: Links to this post