Turtles and Tortoises 3: Boxed into a corner

One of the most serious conservation issues today is the catastrophic decline in recent years of the various species of turtle to be found in south-east Asia. Turtles have been used for local consumption for many years, but urbanisation (which destroys habitat), agricultural development, pollution, and above all over collection from the wild for the expanding food markets of China has placed all of them on the critical list. Many species are in fact only known from specimens found in food markets, and probably have very restricted ranges if they still survive at all.

Turtles and Tortoises 2: Not just on Galapagos

Read more »
Posted by Alan at 11:54 No comments: Links to this post

Turtles and Tortoises 1: The Pancake Tortoise 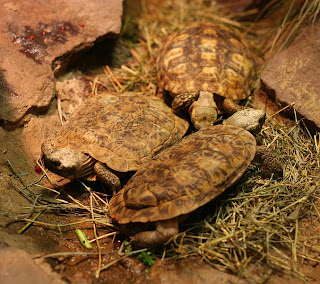 This series of posts will be about one of the most famous groups of reptiles, the chelonians, variously referred to as turtles, tortoises or terrapins. Although they are subdivided into various taxonomic groups, these do not actually correlate with the various English names. In American English, they are almost all referred to as turtles. In British English, the names differ by habitat – tortoise is used to refer to terrestrial animals, turtle to marine forms, and terrapin to freshwater animals. Why we have so many names is unclear, as there are currently no breeding populations of any chelonian native to Britain. Any terrapins seen in the UK are invariably released pets, usually Trachemys scripta, the Red-eared Terrapin. In the past the European Pond Terrapin, Emys orbicularis, was resident in the UK but became extinct as a result of a change to a colder climate many thousands of years ago.

If you walk past the Black-Cheeked lovebird aviary you will see they are now sharing it with a pair of very distinctive looking birds with red heads and very large bills. These are a pair of Brown-breasted Barbets, Lybius melanopterus. They are one of 43 species of barbets and tinkerbirds that span the African continent from south of the Sahara, where they live in a variety of habitats from thick jungle where they spend time in the canopy to the open scrub where some species prefer the ground. Likewise their diets are just as varied as their habitat; birds of the forests prefer fruits where some species in scrub areas may primarily consume termites and ants

The last of the New World primates we have at Bristol can be found in Twilight World. The Grey-legged Dourocouli, Aotus griseimembra, belongs to a widespread group of monkeys which have, uniquely for higher primates, become nocturnal. There are of course numerous nocturnal primates in the Old World, incuding the bush babies of Africa, lorises of Asia, and many lemurs in Madagascar, but they all belong to a group generally referred to as the Strepsirrhine primates. These are distinguished from monkeys and apes, the ‘higher’ or Haplorrhine primates, by features of their face and skeleton, most obviously the moist, dog-like noses and tendency to rely more on scent and less on vision.