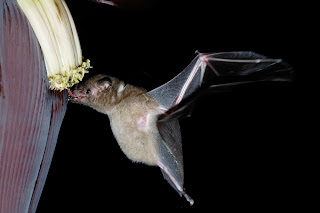 Just gone on show in Twilight World is a group of Pallas’ Long-tongued bats, Glossophaga soricina. These are quite a significant addition to Bristol’s species list, as according to ISIS this makes us the only zoo in the UK, and one of only 10 institutions worldwide, to have them on display.
Read more »
Posted by Alan at 01:03 1 comment: Links to this post

For the April instalment, a few new species have been added to the collection to be seen in the Butterfly House in addition to the regular species. El Bosque Nuevo, the Costa rica butterfly farm that supplies us, has at least 70 species available, so the collection manager likes to ring the changes occasionally to keep things interesting for the annual members who visit regularly.

Frogs of Bristol 6: Handle with care

To wrap up this series on Bristol Zoo’s frog collection, there are the three poison arrow or poison dart frogs we currently have on show. Belonging to the Dendrobatidae, almost all the species of dendrobatid are highly colourful, day active frogs which tend to be fairly bold and therefore make good exhibits, unlike the tiny Mannophryne species I talked about last week. They can of course afford to be conspicuous, as their skin secretions are unusually toxic, although of the ones we have only the Golden Poison Frog, Phyllobates terribilis, is toxic enough to kill humans, with a single frog estimated on average having enough toxin to kill ten adult human beings or 22,000 mice. Fortunately, captive bred individuals never acquire the toxicity they have in the wild, as the wild diet appears essential for the production of the multiple toxins found naturally.
Read more »
Posted by Alan at 08:54 No comments: Links to this post

Frogs of Bristol 5: Noisy but secretive

One of the least conspicuous, but noisiest, of all the frogs we have at Bristol are our Trinidad Stream Frogs, Mannophryne trinitatis. Originally thought to be found on Trinidad in the Caribbean and part of the mainland of Venezuala, the mainland population is now classed as a separate species, M.venezuelensis. This is only to be expected, as any interchange between Caribbean islands and South America must be very infrequent at best. Our species is part of a group of very similar species mostly found in montane forests of Caribbean islands and Venezuela. Several are listed by the IUCN as declining, near threatened, critically endangered, or at best data deficient, with the Trinidad Stream Frog classed as Vulnerable. At present, they are still reasonably common in suitable habitat.

One of the more spectacular frogs we have at Bristol is the Splendid Leaf Frog, Cruziohyla calcarifer. Unfortunately, visitors usually do not get to appreciate their full colour, as like many frogs they are nocturnal and during the day they spend their time fixed to a large leaf, where their camouflage green makes them hard to spot.

Read more »
Posted by Alan at 10:15 No comments: Links to this post