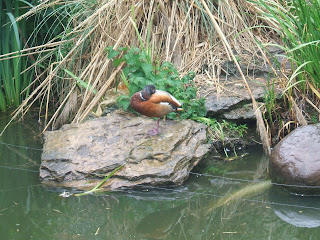 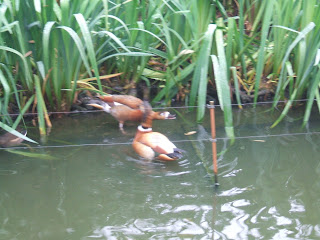 A common sight on wetlands in the Old World, from northern Europe across as far as New Zealand, are the various species of large, colourful ducks generally referred to as shelducks. They tend to prefer water in the middle of open country, or on the coast, and their diet tends to be biased towards aquatic invertebrates, although some plant material is also taken.
Read more »
Posted by Alan at 08:36 No comments: Links to this post

As part of the legacy of earlier days when Bristol’s collection of waterfowl was focused on ornamental ducks we still have a couple of species of diving ducks in the collection – Tufted Duck Aythya fuligula and Pochard A. farina. When these last individuals pass away they will probably be replaced with more endangered waterfowl species. On the whole, the various Aythya species are common ducks around the northern hemisphere, with a few species south of or near to the equator. One of these, the Critically endangered Madagascar Pochard, was believed extinct and is now the focus of an intensive conservation programme with the aid of DWCT and the WWT. Not in quite as bad a position, but still declining to a worrying extent, the East Asian Baer’s Pochard A. baeri is believed to number less than 20,000 adults, possibly under 10,000, and is classed as Endangered by the IUCN.

Read more »
Posted by Alan at 02:15 No comments: Links to this post

One of the commonest non-domestic ducks to be seen in any waterfowl collection is the American Wood Duck or Carolina Duck, Aix sponsa. With its small size, ease of care, and free reproduction in captivity it is popular with both beginner and experienced amateur keepers as well. The only rival it has is with the very closely related east Asian Mandarin, Aix galericulata.
Read more »
Posted by Alan at 08:53 No comments: Links to this post

When Bristol Zoo was opened 175 years ago the centrepiece was a large lake on which a variety of waterfowl were kept. Although the species have changed over the years we still have waterfowl on the lake as display birds and also more important species in various aviaries where they can be better protected from the ever-present urban fox and also receive special care. This series of posts will be about the various ducks (and one goose) held at Bristol.
Read more »
Posted by Alan at 10:15 No comments: Links to this post