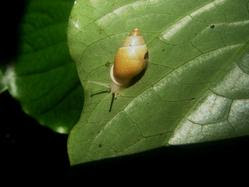 Some decades ago, at the start of the introduction of biochemistry to the study of animal diversity, a research project was undertaken on the endemic live-bearing snails of French Polynesia belonging to the family Partulidae, especially to the widespread genus Partula. The studies were aimed at disentangling the primary engines of evolution of diversity, in other words was the multiplicity of species due to natural selection, random events, genetic drift or something else entirely? Unfortunately, while the debate was raging disaster struck the study populations.


The Giant African Snail (seen in many pet shops in the UK) was introduced by a misguided local entrepreneur as a potential food source. Finding that no one wanted to eat his livestock, he let them go, with disastrous results for the local peoples crops. That was only the prelude however. The real disaster was a misguided attempt at biological control, which took the form of the introduction of the Rosy Wolf Snail Euglandina rosea. Euglandina originates from Florida, where it is a generalist predator of snails and slugs (it is also sometimes cannibalistic). However, it has a preferred size of prey, and Giant snails are simply too big for it once adult. What was the right size however, was the different species of Partula. As with many island species, Partula has a low reproductive rate, only managing a potential 7 fold increase in a year, compared to Euglandinas’ 57 and the Giant snails 500. The result was a mass extinction event, and it was believed that all the Partula in the wild were either extinct in the wild or headed that way.


However, this months’ research colloquium had some good news. Trevor Coote, who gave a presentation on his work on Moorea, has discovered that despite the presence of Euglandina at least some Partula still survive, although in much reduced numbers. In addition, the numbers of Euglandina appear to have crashed, although there are still periodic outbreaks. At altitudes above 1000m, Partula can still survive in reasonable numbers, as Euglandina does not seem a very effective hunter at lower temperatures.


The problem now for Partula appears to be climate change. Even without Euglandina, there is a distinct lack of Partula at lower elevations. When the first experimental breeding programme was initiated as the extinction threat was realised Jersey Zoo discovered that high temperatures reduced Partula reproduction and shortened lifespans, and it appears that this is now happening in the wild as well. There has been talk of a reintroduction of captive-bred Partula to the wild, but personally I feel this is a little premature until the details of their ecology are better understood.


Meanwhile, the genetic research continues. It appears that the Moorean snails all originate from Tahiti, but some Tahitian species may have descended from Moorean species that rafted back to their original homeland (the two islands are only 17km apart). One species, P.clara, has a pure white shell and was found on several islands – a very odd distribution for an animal that normally moves only a few metres in its entire life. It turns out that it is a Tahitian endemic, and was almost certainly spread by humans as a result of trading (the shells were used for shell necklaces). So while humans have caused the extinction or near-extinction of many of its relatives, P, clara has actually increased its range – even outside the Tahiti group to which the Partulidae are otherwise restricted, having reached the Cook islands.

For more information on the Partula problem and its background, see here: http://www.biomedcentral.com/1471-2148/9/204

(Photo from IUCN redlist website)
Posted by Alan at 10:07