Quest for the Wild Canary 14: Canaries and other finches

The canary is actually named for the Canary Islands, rather than the other way around as you might think. The name originates from the Latin name for the islands – Canariae Insulae “Island of Dogs” – a name allegedly given to one of the islands by the Mauretanian king Juba II as a result of the many large dogs found there, although it is possible that the ‘dogs’ were Monk Seals.


Whatever the origin of the name, it was applied to the local species of Serin, Serinus canaria, which these days is referred to in the field guides as Atlantic Canary to distinguish it from the several related species of ‘canary’ found in Africa. On our trip we got numerous good views of them on Tenerife and La Gomera, although they also occur on some of the other islands. They are not naturally found on Fuerteventura or Lanzarote, although a few introduced pairs have been breeding on Fuerteventura for about 20 years in the higher parts of the island – most of the eastern islands are too dry to provide suitable habitat today. Incidentally, Atlantic Canaries are also found on Madeira and the Azores, although I am not sure if they are native there or have been introduced by people.


Unlike many of the native species, Canaries have probably benefited more than suffered from human settlement, despite the mass trapping a few hundred years ago for the cage bird trade. Farmland and permanent water sources for livestock mean more suitable habitat for an open-country specialist in grass and other small seed. Other species have not been so fortunate – at least three species of seed-eating passerine are known only from subfossil remains on the islands. Two of them were local species of Greenfinch – Trias Greenfinch Carduelis (Chloris) triasi on La Palma and the Slender-Billed Greenfinch C. (Chloris) aurelioi from Tenerife. Tenerife was also home to the third species, the Long-Legged Bunting Emberiza alcoveri. The bunting is especially interesting as the size of the wings in the remains found indicate that it was either flightless or very nearly so, which is unusual in passerines, even island ones. There may have been other passerines as well, as some of the plants seem to be adapted for bird pollination, and there are now no specialist flower-feeders on the islands. Some of the living birds such as the Canary Chiffchaff and other warblers apparently serve the function of pollinators of these flowers, some of which are quite common as ornamentals – for example Lotus berthelotti.


For birders, the most famous of the native passerines though is the famous Blue Chaffinch, Fringilla teydea. There are two subspecies known, the nominate form on Tenerife and the now extremely rare F.teydea polatzeki on Gran Canaria. Both subspecies are specialists of the Canary Pine forests found on the upper slopes of the mountains, although they may move downhill in hard weather. There large bills enable them to make use of the pine seeds. No other island finch has this ability, and it is interesting that there never seem to have been any crossbills on the islands, which are the usual pine seed eating birds across most of the northern hemisphere. Judging by how hard they are to see when feeding on the ground in the shade of the pine trees, the colour is actually good camouflage. The Tenerife birds are actually doing quite well - reforestation is expanding their habitat and we found them very easily at La Lajas picnic site in the national park, where they were feeding on crumbs on the picnic tables along with the canaries. As we were there in February the breeding season had not yet started - this is usually around late May onwards. They only lay two eggs usually per nest, which suggests they do not face high post-fledging mortality compared to mainland chaffinches. 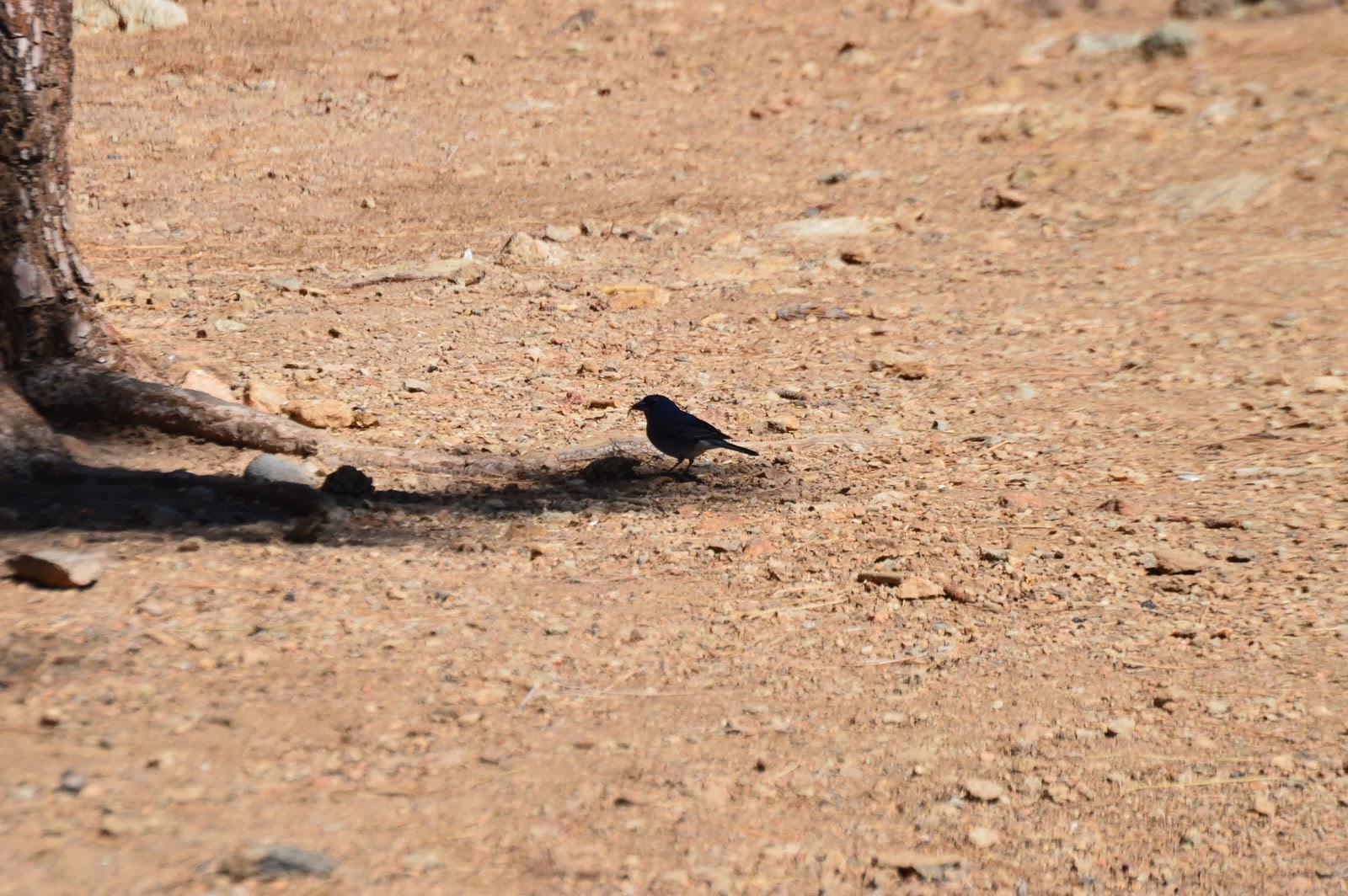 The same blue colour is also found on the local races of the Common Chaffinch, Fringilla coelebs. There are several subspecies on the islands (the ones we saw on La Gomera were F.coelebs canariensis), but they all differ from the subspecies we have in the UK by having more extensive blue shading on the head and back. There may be a parallel with the various forms of blue tit on the islands (see last post) – some genetic analysis indicates they are sufficiently distinct to merit status as full species.


Another important finch species we saw, this time on Fuerteventura, were Trumpeter Finches Rhodopechys (Bucanotes) githaginea. These are also found across North Africa, and they are very distinctive with their large pink beaks. Trumpeter finches are traditionally thought of as closely related to the rosefinches Carpodacus, but they actually seem to group in genetic analyses with the Asian Rosy-finch Leucosticte arctoa, and more distantly with the bullfinches Pyrrhula. There are no native bullfinches on the islands today, but they may have occurred in the past.
Finches are still colonising the islands naturally today. Greenfinches colonised around 50 years ago, and other species show up as vagrants and might begin nesting in the future if conditions are right. Not technically a finch, but at least a seed-eating passerine, Spanish Sparrow Passer hispaniolensis  colonised around 1830 and has spread to become the ‘standard’ sparrow in urban areas all over the islands.


This brings my survey of the islands’ wildlife to a close. Human influence has been a recurrent theme of this series, and a brief overview of the history of the islands seems an appropriate way to finish it off next time.


(most of the images are mine, with the exception of Common Chaffinch, Trumpeter Finch and the plants, which are from Wikipedia)
Posted by Alan at 15:45