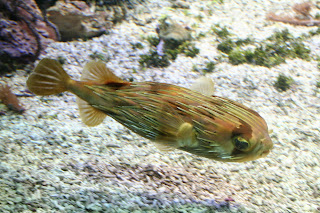 One of the most popular inhabitants of the aquarium (regular visitors got worried when she was temporarily taken off show recently) is Mini the One-Eyed Porcupinefish. Technically a Blotched Porcupine fish, Diodon holocanthus, Mini got her nick name a couple of years ago when she developed a life threatening infection after a minor injury, and had to have an eye removed. As you might imagine, this was a complicated procedure, involving a tube carrying oxygenated water and anaesthetic over her gills for several hours while the operation was carried out, and a post-op recovery in an isolation tank with antibiotics and painkillers. She is now in the last large tank in the Aquarium, now refitted to hold larger marine fish.

Porcupinefish are a form of pufferfish, and like their relatives they defend themselves when threatened by swallowing vast amounts of water or air, which turns them into what is basically a large balloon covered with spikes. This is an extremely effective defence, with adults basically having few known predators aside from larger sharks.

Adult porcupinefish (which can grow to 50cm, usually less) are mostly found in shallow water, either reefs or mangroves, and are nocturnal in the wild. Juveniles up to 9cm are often found in floating rafts of sargassum weed. During the day they tend to rest quietly on the bottom, emerging at dusk to prowl about looking for hard shelled prey such as crabs and shellfish. Their strategically placed fins give them great manoeuvrability, if not speed, so they can follow their prey into corners they might think were safe. Their jaws are modified into a bony beak, which enables them to crunch up prey.

Worldwide, there are many species of porcupinefish found in tropical and subtropical waters. They are all placed in the family Diodontidae, which in turn are part of the order Tetraodontiformes. The order also includes such other (mostly) marine oddities as pufferfish, triggerfish, boxfish, filefish and the seriously odd looking ocean sunfish. As a group, they mainly sacrifice speed to defence and camouflage, supplemented in many cases by poison. Most famously, some species of pufferfish and porcupinefish are used in Japan in the world’s most dangerous delicacy, fugu. Despite the fact that in some years several people are killed by eating it, often after preparing it at home (professional fugu chefs have several years training) it is still widely eaten. The poison, tetrodotoxin, is actually passed up the food chain from the bacteria which synthesize it, and is sequestered in the flesh of the fish, especially the liver. Allegedly a mild dose results in mild euphoria and other effects, but the line between these and lethality is not very wide. Eating fugu was referred to in one of Sir Terry Pratchett’s books as fish and chips- for men, which sounds about right.

Other than fugu, porcupinefish do not figure much in commerce. Some enter the aquarium trade, but more unfortunately wind up as dried and inflated curios in markets. In practice they are listed as Least Concern by the IUCN, given their vast range and flexibility of habitat. They have been spawned in captivity in Japan and the US, and it appears that the process involves several males approaching a female as she rests on the bottom in the evening or during the night and pushing her up towards the surface, where she releases floating eggs to be fertilised. Eggs hatch into larvae after around 100 hours, and metamorphose into 5mm long miniature fish at around 10 days post-hatching.

For some info on the raising of Diodon larvae, see here:
http://www.bluereefphoto.org/blog/2013/7/larval-rearing-of-a-porcupinefish-diodon-sp
#
Next time, another of the odd-looking inhabitants of the new tank, the filefish.


Images from wikipedia
Posted by Alan at 14:14