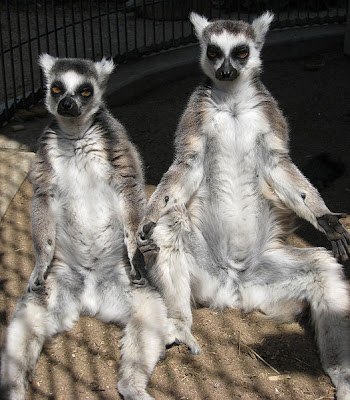 Wednesdays colloquium was a very interesting presentation from Rowena Killick BVM&S MSc (Wild Animal Health) MRCVS, who is the RCVS Trust senior clinical training scholar in zoo and exotic medicine and surgery here at Bristol Zoo Gardens, on a research project she carried out on the Vitamin D levels of some of the new world primates and lemurs here at Bristol.

Vitamin D is synthesised in the skin when it is exposed to UV light of the correct wavelengths from precursors in the diet, and then circulates in the blood to the kidneys where it is converted into the hormone 1,25-dihydroxyvitamin D3, which is a hormone that is involved in the regulation of calcium metabolism. There is a chemically related form called Vitamin D2, which does not have such a potent effect.

The primates of Central and South America (platyrrhines) have an odd biochemical quirk compared to those of the Old World. Their internal organs are resistant to the effects of Vitamin D3, and they cannot use Vitamin D2 at all. In order to maintain proper calcium metabolism, they have circulating blood levels of D3 which are ten to one hundred times higher than similar monkeys in Africa or Asia. Living as they do close to the equator, producing sufficient active D3 is of course no problem in their home range.

The potential problem we have is that Bristol is at mid latitudes in the northern hemisphere, whereas the two groups of primates mentioned earlier all live close to the equator. In humans, lack of exposure to sufficient ultraviolet light causes serious health problems such as rickets, and even sub-clinical levels of vitamin D deficiency can result in problems with fertility, disease resistance, or even potentially cancer. Our primates all have access to outside enclosures year round, so the question is, is this sufficient?

This past year as part of routine health checks the blood vitamin D3 levels of lemurs and new world primates were measured. Although levels of Vitamin D3 were within normal ranges for published data (in fact the lemurs were at the high end), the NWP’s were at the low end, especially in winter, and there was some indication of lower bone density than would be ideal.

So, what does this mean for the husbandry of New World Primates? At present, most zoo primates are given a primate pellet which has supplementary D3 added, as well as a variety of fruit and vegetables. At Jersey metabolic bone disease in Pied Tamarins was cured by providing UVB lighting, and indications are that this kind of lighting should become standard for New World Primates without access to tropical, or at least sub-tropical, sunlight in outdoor enclosures. This would be better than providing additional dietary supplements, as the risk of overdosing would be much lower – like most vitamins, excess Vitamin D is potentially seriously toxic.

The other requirement is of course more research. The various primates of the Americas are enormously diverse, and may have requirements for more or less D3 depending on the species. For example, the nocturnal Owl Monkeys or Dourocoulis, Aotus, have apparently no higher D3 levels than Old World primates. On the other hand, some South American species like the Uakaris are notoriously difficult to breed in zoos – could a higher Vitamin D/UVB requirement be the cause?