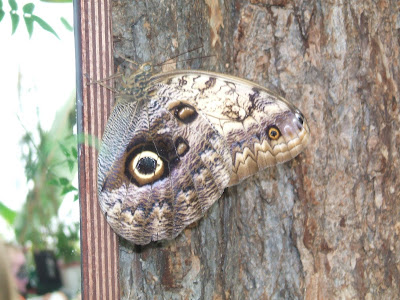 The Owl butterflies are a group of about twenty very large South American butterflies, often seen in butterfly houses as they are spectacular and easy to raise on butterfly farms. Here at Bristol we have the Pale Owl butterfly, Caligo memnon.
The various species of Caligo belong to the gigantic and diverse family the Nymphalidae, and in particular to the very large subfamily (previously a full family) Satyrinae. As such they are most closely related to the multitude of “Brown” butterflies found in every grassland on earth, but among their closest relatives are the vivid iridescent blue (and just as large) Morpho butterflies, which we also have at Bristol. Also closely related are the somewhat smaller Opsiphanes species of North America.

Most of the Satyrine butterflies feed on monocotyledonous plants, and the Owl butterflies are no exception. The commonest food plants in the wild are various species of Musa (banana) and Heliconia, although other similar plants are also used. Unfortunately it also takes to cultivated banana, to which it is a serious agricultural pest. Other species of Caligo will also feed on wild ginger, Hedychium, and Canna lilies. At the butterfly house at Bristol eggs are sometimes laid on these plants as well as on the banana plants growing in the house.

Owl butterflies get their name from the single large eyespot on the hind wing, which resembles the head of an owl (allegedly), although a monkey such as a marmoset looks like a better bet to me. It is not clear what predators the eye spot is designed to deter – the spot being rather close to the body when at rest suggests it is not to deter birds. They are reluctant fliers, most active at dawn and dusk.

Owl butterflies are not primarily feeders on nectar, instead feeding on the juices of rotting fruit, carrion, or even dung. At the butterfly house at Bristol they are provided with a variety of fruits, especially banana and orange, which they love. However, we have to make sure the fruit does not ferment, as alcohol has the same effect on butterflies as it does on people! The lifespan of these butterflies is long, about 4-6 weeks as an adult, and perhaps 2-3 months as a larva. We do not have any adults flying in the house as of yesterday, but you can see larvae on the caterpillar table. The larvae are gigantic, as the adult butterfly has a wingspan approaching 20cm.

It has been reported that males of one species of Owl butterfly (C. idomeneus) forms very brief mating territories, which they visit each day for only about 15 minutes just as the stars fade with the dawn. These are spread out along the edges of roads, with each male spaced about 100m apart. Other species apparently form leks at dusk, although I have not seen this at Bristol.

All in all, the Owl butterflies therefore constitute a fascinating species to watch. I am not aware of any studies of butterfly behaviour in a setting such as ours, but I would think it might make a good research project.
Posted by Alan at 12:09