Pigeons of Bristol 6: A confusion of Fruit Doves 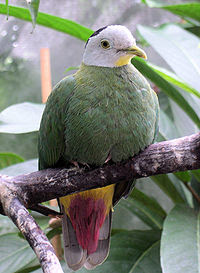 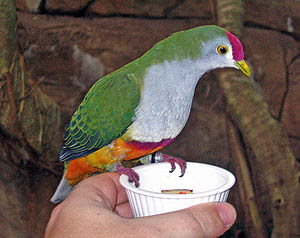 Scattered throughout South East Asia, Indonesia, and many Pacific islands are members of a huge group of small-to-medium sized, and usually very colourful, pigeons, generally referred to as Fruit-Doves of the genus Ptilinopus. We have two species at Bristol, the Black-naped Fruit-Dove P. melanospila (above) and the Beautiful Fruit-Dove Ptilinopus pulchellus (below). There are nearly 200 different subspecies described, with probably more awaiting description, and with an unknown number of extinct forms, especially on Pacific islands.


Unfortunately, as a result of the huge diversity of species, there has been little effort to establish breeding programmes for many of the forms currently held in the world’s zoos. Most of those held are widespread species without major threats at present, but there are numerous island endemics which are in a precarious condition and research on their husbandry and ecology is badly needed.

For individual taxa, numbers in the captive population are mostly under 50 birds scattered through numerous collections. Aside from the two species Bristol holds, the only species likely to have a viable captive population in Europe is the Superb Fruit-Dove P.superbus, and even this only has 24 birds in Europe, with a global total of 71 by the latest count on ISIS. American visitors may also see the Jambu Fruit-Dove P.jambu, and the Mariana Fruit-Dove P.roseicapilla

The islands of the Pacific used to hold a wide range of endemic pigeons prior to human colonization. Larger islands, or island groups, would usually have 5 or 6 species, with a “standard package” of 1 Gallicolumba species, 1 Ducula, and at least 2 Ptilinopus, plus some unique endemics like the Choiseul Crested Pigeon Microgoura meeki. Today even the richest fauna has only 3, with 1 Gallicolumba, 1 Ducula (often the widespread Pacific Imperial-Pigeon D.pacifica, which has replaced the native form), and 1 Ptilinopus.

Birdlife International has listed one species, the Negros Fruit Dove P.arcanus, as Critically Endangered. It may in fact be extinct – it is only known from a single specimen shot in 1953. However, as several Negros birds are now known to occur on the nearby island of Panay it may conceivably still survive there, albeit in very small numbers.

(images from Wikipedia)
Posted by Alan at 01:12