Pigeons of Bristol 5: Count the Ducula 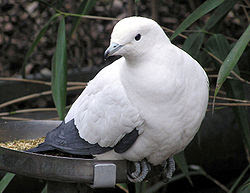 Throughout the rainforests of South East Asia, Australasia, and the Pacific anywhere there is a reasonable expanse of rainforest you are likely to find in the trees a large pigeon, commonly called an Imperial-Pigeon, of the genus Ducula. Currently at Bristol we have two species, the Chestnut-naped Imperial-Pigeon D.aenea shown below and the Pied Imperial-Pigeon D.bicolor at the head of this post. 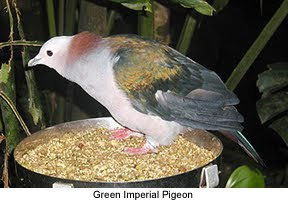 These are the most likely to be seen in any zoo which holds Imperial-Pigeons, but the ISIS listing currently shows 12 other species in various zoos, mostly only a few individuals at a single collection, although the Nutmeg or Torres Strait Pigeon, with 154 worldwide, is also to be seen and aside from the two species at Bristol probably the only one with a viable captive population. In the wild however Imperial-Pigeons are very diverse, with over 100 different species or subspecies described.

The taxonomy of these different forms is sometimes unclear – for example the Nutmeg and Pied Imperial-Pigeons are very similar and may be better classed as subspecies. To add to the problem, as Bristol found out the hard way, Imperial-Pigeons, even if very different in appearance, will hybridise in captivity and probably also do so in the wild. 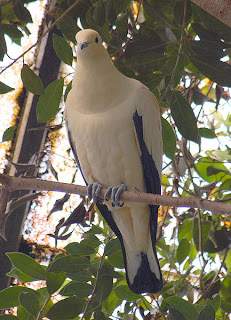 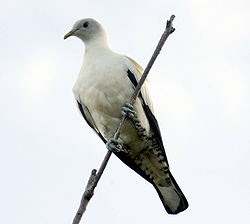 Pied Imperial-Pigeon at left, Nutmeg Imperial-Pigeon at right. Note the difference in the undertail pattern.
Many Ducula species are quite migratory, with Nutmeg Pigeons crossing between northern Australia and New Guinea, and inter-island travel is common. The widest distribution of all is probably the Pacific Imperial-Pigeon D.pacifica, with a range from New Guinea to Fiji and American Samoa.
Other species however are resident, and these are often classed as Threatened or Vulnerable by the IUCN. Large pigeons have been favourite bird prey for humans since prehistory, and as many will readily feed on human crops they are fairly easy to lure and catch. On small islands with small populations, the result is extinction – several species are known to have become extinct already. Of the threatened forms, only the Giant Imperial-Pigeon, D.goliath, has any captive population, with 11 in a single Japanese zoo.

Imperial-pigeons are specialists in feeding on fruits, even large-seeded ones, and are important dispersers of forest trees. Large seeds are regurgitated after being stripped of pulp, whereas small seeds pass through the digestion and are excreted potentially many miles from the source tree.

Although we have not bred the Chestnut-naped Imperial-Pigeon recently, our Pied Imperial-pigeons breed every year – in fact we have already had our first fledgling for 2010. They can be seen in the Forest of Birds in the centre of the zoo. They only lay a single egg, but can produce several clutches a year. As with all pigeons, the young are fed on crop milk and the nest is a flimsy construction of sticks – I never cease to be amazed at how a group of birds like pigeons that can barely build a nest are still so widespread.
Posted by Alan at 10:36