As well as the various education and captive breeding programs run from Bristol, the zoo is also involved in several in-country projects all over the world, usually as part of a consortium with other zoos and conservation organisations. Here are some of the projects we are involved in, and links to where you can find out more.


Cameroon
The bushmeat trade in Africa is one of the major threats to Africa’s wildlife. Contrary to what is commonly believed, this is not a subsistence-level practise, rather in many cases a supply of expensive wild meat to the cities for high-end purchasers. As a result of the hunting of primates especially, a large number of orphans result. These tend to be kept for a while and then eaten later, but with improved law enforcement many are now confiscated and go to various rescue centres. Since 1997 Bristol has been working with the charity Ape Action Africa, providing veterinary support, education training, and publicity for support and care, with possible eventual rehabilitation, at the Mefou National Park. There are already a small number of regular visitors, and the potential for increasing eco-tourism is certainly there.

Bristol also works with the Living Earth Foundation at the Dja Biosphere Reserve, helping local people to alleviate the pressure from bushmeat hunters on the local wildlife. This is a good illustration of the problems involved in combating the problem – many of the hunters are outsiders rather than members of local communities, and corruption and lack of good law enforcement, which is just as much a matter for concern to the locals as anywhere. Future problems may include increased timber extraction and mineral prospecting in the area around the reserve, which may increase human pressure on the environment

Located 300km north of Madagascar, the Comoro islands are an even greater environmental disaster area than Madagascar itself. They are one of the most densely populated regions on the planet, and when this is combined with corrupt government, a succession of military coups, and a lack of basic knowledge of modern agriculture, the impact on the local wildlife has been huge. This is compounded by the fact that the islands more or less only means of earning foreign exchange is the export of ylang-ylang oil, which is used in various perfumes including Chanel No 5, currently being advertised by Brad Pitt on British TV. Unfortunately, the process of distillation requires vast amounts of firewood, further compounding the deforestation of the islands. Today, the loss of forest cover has had a disastrous effect on the islands water table – where there were once 40 permanent rivers and streams on the islands there are now less than 10, and when the rains come silt is washed off onto the surrounding reefs, killing the coral polyps and destroying fish stocks.

Bristol Zoo and its partners are currently working on trying to alleviate this situation, employing local conservationists to educate local people, and in particular improving agricultural practices so that there is less need to clear forest for new farmland. We are also looking into whether more efficient ylang-ylang oil stills can be produced, possibly using solar power. However, these would be quite expensive and hard to distribute to the small-scale producers of the raw oil. So this needs further work as well.

The multiple ongoing economic, political, and environmental disasters in Madagascar are too large for any one organisation to tackle, so Bristol Zoo is concentrating on the extremely remote Sahamalaza peninsula, situated in the extreme north west of the island. This is home to two endemic primates, the Blue-Eyed Black Lemur and the Sahamalaza Sportive Lemur, as well as two other more widely distributed lemur species. 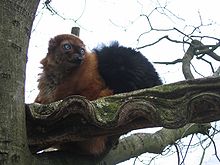 The problem for the local wildlife is both hunting and deforestation. Malagasy culture places a very high status value on cattle, and deforestation for cattle ranching is a major threat. Combined with slash-and-burn cultivation methods, which probably go back to the original human settlement of the island around 2000 years ago, the result is forest fragmentation and progressive declines in all forest wildlife. Bristol Zoo, along with 30 other European zoos, has formed the Association Européenne pour l’Etude et la Conservation des Lémuriens (AEECL) which finally managed to get Sahamalaza declared a National Park in 2007. AEECL currently maintains a permanent research station in Ankarafa Forest, which is the largest remaining area of continuous forest in the region.

Philippines
With over 7000 islands, many with unique endemic species, the Philippines are one of the major biodiversity hot spots on the planet. Deforestation however, has been massive on the islands, and overall perhaps less than 7% of the original forest cover remains.

Bristol Zoo has been working with local organisations to protect the remaining wildlife, focusing on the birds, and in particular the Negros Bleeding Heart Dove. Bristol has been successful in breeding two other species of Bleeding Heart Dove at the zoo, and we have helped set up a local captive breeding program for the Negros species, which is finally showing some success. Our next target is local research on the wild populations to determine the best areas for intervention. In order to maintain or if possible increase forest cover, we also need to work with local people to develop sustainable means of providing them with an income from intact forest, such as honey production or other forest products.

South Africa
The South African Penguin is the only penguin to nest in Africa, and in the past lived in vast colonies along the coast from Namibia to Port Elizabeth. As a result of human disturbance of nesting colonies, a series of both major and minor oil spills, and changes in the ocean currents affecting fish stocks, the penguin is today classed as Endangered, with a wild population perhaps as low as 27,000 pairs, a disastrous fall considering the population at the start of the 19th century was probably around 4 million. While the colonies today are protected, nothing can be done about the currents, which now keep the sardines and anchovies they need to raise their young away from the colonies. Doubtless the currents have changed in the past as well, but then there were more or less continuous colonies along the coast, and if the current shifted food away from one colony another would probably benefit. Penguins are very site- specific, and seldom switch between colonies to nest, so Bristol is working with local organisations to research the possibility of artificially creating new colonies closer to the new fish-rich areas, possibly using translocated or captive-bred young birds.

There is still a lot of Bristol Zoo animals to cover, so starting next week I will begin a series on our lemurs. Later in the year lizards, snakes, passerines, and more British wildlife to come.