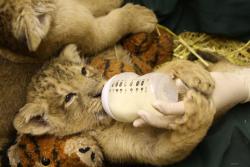 Readers may recall that our male Asiatic Lion Kamal died last year. However, before he died he bacame a father for the second time at Bristol, and now the cubs are older the embargo on the press release has been lifted. From the Bristol Zoo website:


Unfortunately 12 days later on the 21 November Kamal, our 18 year old lion and the father of the cubs, was put to sleep due to his severe deteriorating health in old age. Following the death of Kamal, Shiva began mis-mothering her babies, forcing animal and veterinary staff to make the difficult and rare decision to intervene and remove the two week old cubs for hand-rearing.

As the cubs are still very young, they are off show to zoo guests, but can usually be seen via a video link, shown on a screen at the front of the lion enclosure. 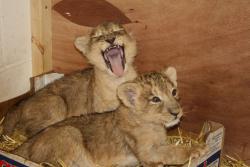 Hand-rearing is a very demanding and challenging process and is only ever a ‘last resort’, As their father, Kamal, was an important male for the conservation breeding programme, both lion cubs are also an important part of the future breeding programme. There are currently only a few hundred Asiatic lions left in the wild, so every step had to be taken to ensure their survival.

‘The initial transition was a very important time for the cubs,’ says Lynsey Bugg, Assistant Curator of Mammals. ‘We placed straw from their previous enclosure on the ground for familiarity, and gave each cub a cuddly toy to snuggle into to mimic mum.’

‘We also worked closely with the vet team to monitor their fluid intake while we got both cubs used to feeding from artificial teats.’

A team of five keepers are dedicated to hand-rearing the cubs who were initially fed five times over a 24 hour period. In the early days, while the cubs got used to the new feeding regime, keepers could spend up to two hours doing each feed.

Every day each cub has his weight, temperature and respiratory rate checked. The keepers monitor their level of activity to ensure they’re progressing well and have watched, and felt, both cubs cut their teeth.

‘Alongside the challenge of feeding you need to be mindful of everything you do when hand-rearing,’ continues Lynsey. ‘We need to prevent the cubs from imprinting on the keepers, so we make sure we treat them the way that their mum would when we handle them.’

This involves picking them up by the scruff of the neck, brushing them with a coarse brush, which replicates them being licked by their mother’s coarse tongue, all to ensure they go on to be a fully functioning social animal.

At nine and a half weeks old both cubs are doing well and beginning to reveal their individual personalities. They’re spending more time outside in an off-show enclosure and are being weaned onto meat feeds.

‘I’m very proud of my team,’ says Lynsey. ‘However, I’ll deem the hand-rearing a success when our two young males are fully weaned and then go on to breed themselves. After all, protecting this incredible species is what we’re all working towards.’