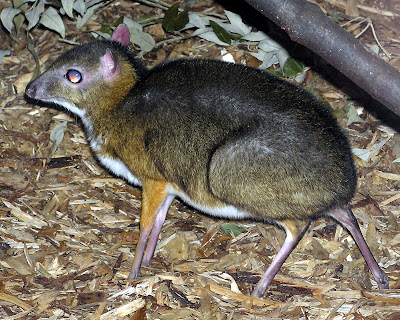 Tucked away in Twilight World at Bristol Zoo, and all too often overlooked, is one of the smallest of the world’s hoofed animals, the Lesser Malay Mouse Deer Tragulus javanicus. Only about half a meter long, and weighing about 2kg, it is an inhabitant of south east Asian rainforest and scrub, often close to water – basically anywhere they can find dense cover.

Technically, the common name is something of a misnomer, as it is actually not a true deer, but a chevrotain belonging to the family Tragulidae, which is close to the base of the group of hoofed animals called the artiodactyls or even-toed ungulates, which also contains the pigs, hippopotamuses and giraffes, and which is now thought to be the group that gave rise to the whales. Their fossil record dates back to the Miocene in Europe (c15mya), but they had a long record before then, as the earliest whales are known from Eocene rocks of 47.5 mya, and mouse deer must have branched off the group which gave rise to them much earlier – probably just after the end of the Cretaceous period when non-avian dinosaurs became extinct, if not earlier.

As primitive ruminants, mouse deer lack many of the characteristics of more advanced forms – for example the main form of male display is by enlarged canine tusks rather than antlers or horns. The stomach is fairly simple, with only three chambers compared to the four of deer or cattle, and all in all they bear a surprising resemblance to the agoutis of South America, which are of course rodents. The diet is mainly vegetarian, especially fruits, although they do eat snails and some insects as well, and they probably also take fungi.

They reach maturity quickly – usually within a year but they have been known to breed at six months. They have one or two young at a time as far as is known, but they have four teats, which may indicate they sometimes produce larger numbers of offspring.

There are several other species of mouse deer, of which the commonest is the Greater Malay Mouse Deer Tragulus napu. There are also mouse deer in India, and also a more distantly related form in Africa, Hyemoschus.. It is very likely that more species are to be described – with such a huge range and antiquity of the group, there are probably several cryptic species included in the described forms. This makes things very difficult for zoo conservation, as unless you are careful to breed only animals from a known geographic location there is a strong risk of producing hybrids which have no value for conservation purposes.

As “bite sized” animals, mouse deer are understandably nervous creatures, but they tame quite easily – in Thailand they are often kept as pets in the back garden. They figure prominently in folklore – Mouse Deer is a trickster figure like Brer Rabbit who triumphs by outsmarting anything that wants to eat him – which is everything!

The chief threats they face today are hunting and habitat destruction. Their status in the wild is very little known – as nocturnal, secretive animals they are very hard to study. The only Mouse Deer that are likely to be seen in zoos outside Asia are the Greater and Lesser Mouse deer. European zoos have concentrated on the Lesser Malay, whereas American zoos have concentrated on the Greater Malay - this ensures that there is less duplication of effort. There have been efforts to encourage the expansion of the European zoo population of Lesser Malay mouse deer – Bristol Zoo currently has only one pair but has successfully bred them in the past and distributed them to other collections. According to ISIS the current European zoo population stands at 44 animals, with 9 births in the last year.

(Photo from Wikipedia commons - ignore the eye shine)
Posted by Alan at 09:44