A Tale of Two Squirrels

The commonest wild mammal now seen by the average person in the UK is an introduced species, the Eastern Grey Squirrel Sciurus canadensis. Introduced in the late 19th century to England, it spread rapidly from the first. It has widely been blamed for the decline of the Red Squirrel Sciurus vulgaris, and practically no one has a good word to say for it.

However, the true picture is a bit more complex. For one thing, practically all the Red Squirrels in the UK are themselves the result of reintroductions from mainland Europe, which began in Scotland as early as 1772!

Our original Red Squirrels were probably an endemic race of the widespread Eurasian Red Squirrel, which has a huge range in Europe from Norway to Spain, and east as far as Greece. In the Middle East it is replaced by the very similar Persian Squirrel, whose only European station is on the island of Lesvos, which is in sight of the Turkish coast.

The Red squirrel is primarily a conifer specialist, in the south being found in stone pine woods around the Mediterranean and at altitude in the Alps. It can survive in deciduous forest, where it depends heavily on Hazel. In addition to seeds, it will take birds eggs, the buds of trees, and bark. However, in Oak woodland it is at a disadvantage, as it has trouble digesting acorns.

Red Squirrels reached Britain at the end of the last Ice Age, when the tundra that had covered southern Britain was replaced first by Taiga forest of Birch and Pine, then in turn by mixed deciduous woodland. Even after the Channel formed and Britain was isolated, squirrels would have been fine in the oak forests that covered England, especially along rivers where the activities of Beavers would have encouraged Hazel coppice.

The squirrels’ troubles started when Neolithic farmers arrived and began clearing the woods for farmland. The deforestation was quite rapid – by the Roman period the proportion of forest cover in England was about the same as today – but the habitat loss was inexorable. By the 18th century the demands of a growing population and the building of the British Navy had reduced tree cover to perhaps 2% of the country, and even in Scotland few if any remain – the last in Sutherland was reported in 1642 for example.

The needs for the British navy to have a source of timber for shipbuilding then caused a swing in the squirrels favour. As well as new plantations of conifers made by landowners, they introduced Red Squirrels. Some of those were moved from other parts of the country, but there were also imports from Scandinavia.

It is in this context that the Grey squirrels were introduced. As primarily animals of deciduous woodland, and with few predators (Pine Martens, Foxes, and most birds of prey having been wiped out or restricted in numbers by gamekeepers) they had a built in advantage, as they have no problem feeding on acorns or indeed anything else. In addition, they seem to carry a parapox virus which Red Squirrels are susceptible to, and as a result it seems inevitable that, at least outside the Highlands and some offshore islands in the south that they have not reached (The Isle of White and Brownsea island for example), they will continue to be the typical squirrel of Britain. 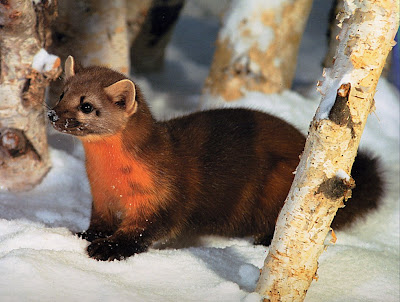 There may however be a chink in their armour. In areas at the edge of their range in Scotland they appear to be at a disadvantage compared with Red Squirrels when faced with predation by Pine Martens. These were wiped out over most of their range in the UK, but are now starting to make a comeback. Grey Squirrels are more terrestrial than Reds, and are easier for Pine Martens to catch. As a result, in areas with healthy Pine Marten populations, Grey Squirrels seem to decline, if not actually die out.

The status of Pine martens in England is unclear. They certainly seem to be extinct in the south east, but in Wales, possible Cornwall and the Lake District it is possible small populations survive. Reintroduction seems unlikely in the near future, however in the north of England Scottish Pine Martens seem to be re-colonising naturally. If you see a Pine Marten, they are quite unmistakeable –good luck on your search!
Posted by Alan at 11:13