Land of the Dodo 11: Weaving a spell 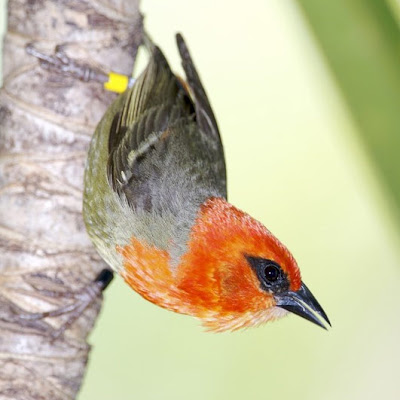 Scattered through Madagascar and the nearby islands of the Indian Ocean is a group of at least 10 species of weaver birds, the fodies of the genus Foudia. Unlike the colonial weavers of mainland Africa, they behave far more like most passerines, nesting in paid by themselves.
Primarily forest birds, one species, the Madagascar or Cardinal Fody, has adapted to open grassland and is often found around farmhouses. As a result of people liking their colours, the Madagascar fody has been taken to many other islands, including St Helena in the Atlantic. 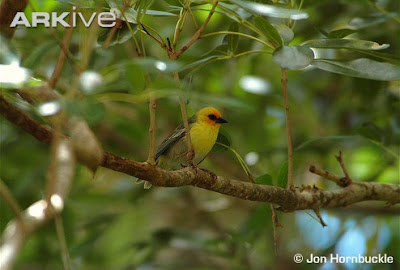 At first contact, there were three fodies in the Mascarenes, one for each of the islands, but today only the Rodrigues fody F.flavicans (left) and the Mauritius fody F.rubra (top)survive. Even these only barely managed to hang on, with the Rodrigues at one time down to perhaps 6 pairs before conservation measures helped its recovery (it currently stands at 900-1000 birds). The Mauritius fody is in far worse shape, and there are intensive conservation measures being undertaken to help it to survive.

Fodies are most closely related to the Orange Bishop, Euplectes, an African weaver bird that like the fodies nests independently. One might think that the birds on the islands originated from Madagascar, but analysis of their DNA shows that the sequence runs from the Seychelles, then to Rodrigues, then Mauritius, and finally Reunion, Madagascar, and the Comoros islands. Originally a rainforest bird, one of the Madagascan species adapted to grassland, later became a bird of farmland, and has now been introduced to all three islands, which on Mauritius and Rodrigues it shares with its close relatives.

The main cause of the decline of the fodies was probably introduced rats, which readily predate fody nests. It is one of the ironies of conservation that the only reason the Mauritius fody survived was because of aplantation of introduced Cryptomeria trees, which do not provide food for rats or monkeys and consequently enabled at least some nests to escape.

Intensive help for the fody, and indeed the other passerines of Mauritius, only started in 2002. Fodies have proved reasonable straightforward to breed in captivity, and techniques of hand rearing have been devised to enable chicks from wild nests to be reared. This is of course a very labor intensive process, and readers may be interested in the rearing diet. This comprised the following:
Bee larvae (throughout the rearing period)
Crickets (first guts, then abdomens)
Waxworms (older chicks only)
Mice (first internal organs, then cut up as the chicks grew)
Papaya
In addition, chicks received Nutrobal, Avipro, and Nekton as vitamin and mineral supplements

Initially chicks were fed hourly between 05:00 and 21:00, with the intervals between feeds increasing to 2 hours by the end of the rearing period, with chicks fledging at 18 days. Hand reared chicks were kept in a brooder at 36 degrees at first, gradually reducing as they fledged to the ambient air temperature of 26 degrees.
These hand reared chicks were released on isle aux Aigrettes, and the attempt has proved a great success. Fodies are now breeding on the island, with over 150 birds. One problem is the introduced Madagascar Fody (below), which could potentially hybridise. It appears however that the difference in preferred habitat and song make it unlikely for the two species to interbreed, but the situation is being closely monitored. 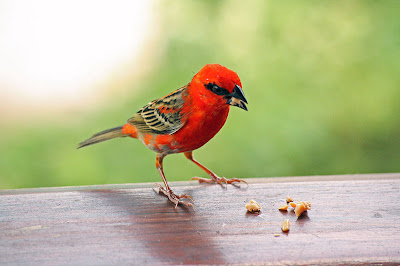