Butterflies of Bristol 2: The Heliconiines 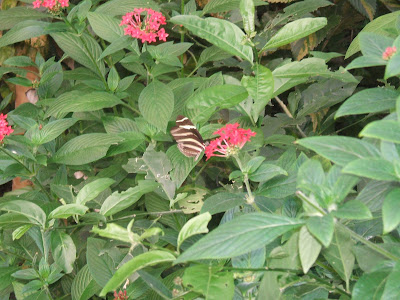 One of the most obvious groups of butterflies to be seen in butterfly houses around the world are the various species of the Nymphalid tribe Heliconiini. This is an almost entirely Central and South American group of 69 species and innumerable local colour forms, characterised by a strong preference for members of the Passifloraceae as larval food plants. Passiflora contains some potent toxins, which are taken up by the larvae and render the adults distasteful to predators, especially birds. As a result, they tend to be confident and vigorous flyers, usually with warning colours of red, black and yellow in a variety of patterns, which makes them very obvious when in a butterfly house. 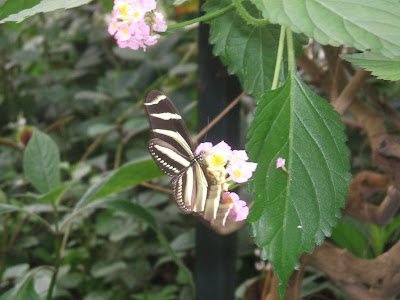 Here at Bristol we usually have two or three species on display, the Julia Butterfly Dryas Julia, and two species of Heliconius proper, the Zebrawing H,charithonia and the Postman H.melpomene. The various Heliconius butterflies are the original inspiration for the concept of Batesian mimicry, in which unpalatable species mimic each other, thereby ensuring that potential predators do not need to learn so many different warning patterns. H.melpomene for example mimics the various forms of H.erato. The species vary greatly across their range, but in any given location the two species will look alike. Aside from appearance however, the species will have different ecologies, exploiting food plants differently and using different habitats.

Heliconius have a rare ability among butterflies – they can process some solid foods in the form of pollen grains as well as liquid foods like most Lepidoptera. They produce abundant saliva which dissolves some of the amino acids in the pollen they collect on their proboscis, which can then be used for egg production and possibly boosting their store of toxins inherited from the larval food plant. This enables them to survive long periods – some species have been known to survive six months or more! This habit has affected the evolution of one of their main pollen sources, the tropical vine Psiguria, which belongs to the Cucurbitaceae (the cucumber family). Psiguria produce mostly male flowers, but occasionally a vine will produce female flowers which the butterflies visit by mistake, thereby pollinating the vine.

Another characteristic found in Heliconius butterflies is the phenomenon of pupal mating. The day before emergence, the pupa of a female butterfly releases a pheromone which attracts males who sit on the pupa itself, and mate with the female before she has finished expanding her wings. If the female emerges without a male, a normal courtship and mating will occur. Pupal mating appears to have evolved only once, as the various species where it occurs are all related.

Mimicry does not only occur among the butterflies. Heliconius larvae are voracious, and pose a grave threat to the foodplant, especially those species with gregarious larvae. Passiflora vines have several species where small nodules resembling butterfly eggs appear on the leaves and tendrils, which fool prospecting females that this food plant already has more larvae than can support her own eggs.

Some species of Heliconius roost in groups. At Bristol, this is especially obvious with our H. charithonia, as they almost all use the tangle of jasmine close to the exit to roost overnight. If you visit from 2.30 onwards, you can see a large cluster of sometimes over 25 butterflies all hanging from the tendrils. They are sometimes joined by other species, but I am unsure if this is deliberately seeking protection amongst the swarm of distasteful butterflies or simply a preference for a similar roost site.