Butterflies of Bristol 5: The Charaxes 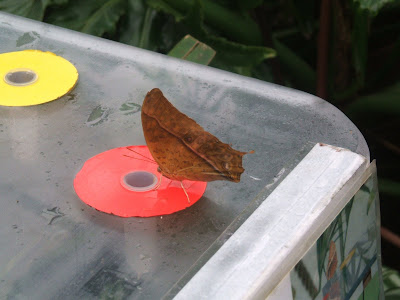 Moving on from South American butterflies to those from Africa, one of the more obvious nymphalids on show are the various species of Charaxes. This is a huge group of species, with a collective range extending across the Old World tropics. A single species, C.jasius, breeds around the Mediterranean, and I have seen these on several occasions. The best time is probably late summer, and the best location is a fig grove – the Charaxes butterflies are feeders on fruit and dung rather than flowers. Charaxes butterflies often have intricately marked or cryptic undersides to their wings. Upper sides may be marked in shades of orange or brown for the most part. At the zoo we usually have three species:

The Green-veined Charaxes, C.candiope, has a range across Africa south of the Sahara and has also colonised islands near the mainland, such as Sao Tome, Socotra, and Madagascar. Interestingly, while the mainland form is fairly uniform, each of the island endemic subspecies is quite distinctive. This is probably an example of a “founder effect”, where the original colonists represented a small subdivision of the genetic diversity of the source population. The caterpillar feeds on various plants, but the favourite appears to be species of Croton. It has however also been reported as feeding in some locations on Pennisetum (millet).

The Blue-spotted Charaxes, C.cithaeron, is sexually dimorphic. The males have blue spots on the upper side of the forewing, whereas females have a distinctive white spot. The caterpillar feeds on Afzelia and Brachystegia amongst other trees in the Leguminosae.

The Flame-bordered Charaxes, C.protoclea (shown at top) has a widespread range across central Africa from coast to coast. Like many Charaxes, it is a rain forest butterfly, and is often found on cocoa plantations. There is a distinct difference in feeding habits between the sexes – females frequent animal dung (probably to collect soluble proteins for egg production), whilst males avoid dung and feed almost entirely on fruit.

To the best of my knowledge, the Charaxes have not yet bred in the butterfly house. However, in view of the wide range of plants present, this may change in the future as the planting matures and more plants reach full height – often the physical structure of the plant is as important as the species for choice as an egg deposition site.
Posted by Alan at 07:47