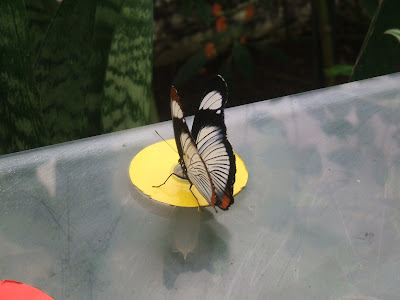 The egg fly butterflies of the genus Hypolimnas are a diverse group of nympalids with a worldwide distribution. We have at various times four species at Bristol, of which the two you are most likely to see are the Variable Eggfly H.anthedon, and the Red-Spot Diadem, H.usambara. You may also see the Great eggfly H.bolina and the Mimic Eggfly H.misippus. 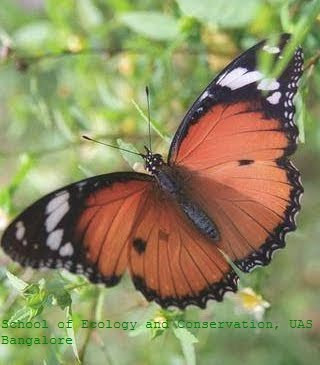 The sexes in the Mimic Eggfly especially are easy to distinguish. Males are black on the upper side of the wings with a large central white spot on each wing. Females on the other hand are mimics of various Danaid butterflies, which are toxic. In different parts of their large range through the Old World tropics, different toxic butterflies are mimicked, depending on which is the commonest in the area.

Hypolimnas species feed as larvae on many different plants, of which the commonest are Abutilon and Ficus, but many also feed on species of Urticaceae (stinging nettle). H.bolina and possibly others exhibit maternal care, with females guarding the leaves where eggs were laid against ants and parasitic wasps.

In 2006 a very interesting study was released into the rapid evolution of one of our species, H.bolina, as a spread of resistance to the effects of infection with the bacterium Wolbachia. This organism is an intracellular parasite and spreads through the species via infection of the eggs. The problem for Wolbachia is that males do not lay eggs, so it is in its interest for males to be rare. This occurs by the organism killing male embryos before the larvae hatch, thus reducing competition for female caterpillars that are carrying it. The butterfly on the other hand needs all its larvae to survive and breed, so there is strong pressure for resistance to develop. What is interesting is how rapidly that can spread through the population. Some H.bolina populations in SE Asia are resistant and produce males despite infection, others are still susceptible. Almost all the butterflies on Borneo for example are resistant today. However, as recently as the 1960’s the Bornean butterflies were vulnerable, showing how quickly resistance can spread through a population. For the full article see here: http://www.plosbiology.org/article/info:doi/10.1371/journal.pbio.0040283

(Pictures taken at Bristol and from Wikipedia)