A few years ago I was chatting with some visitors to Bristol Zoo who mentioned they had some very unusual animals back home. They were retired farmers, and when a local wildlife park closed they had bough a pair of Brazilian Tapirs. Not only had they kept them successfully, they had even bred.

While I would certainly not recommend that anyone else try this, it gives some idea as to the adaptability of the species. In fact tapirs have been kept and bred in zoos for many years, and they can be seen in many animal collections around the world.

So what are these strange creatures? I have overheard many explanations from visitors, from the understandable (“they look like pigs a bit”) to the downright strange (“they’re anteaters dear”). In fact they are of course hoofed animals, most closely related to horses and rhinoceroses, although the oldest fossil tapirs go back a very long way, so they are not especially closely related to anything.

The fossil history of tapirs is hard to unravel, as most species appear to have been fairly solitary animals so fossils are thinly spread. They may have originated in North America, although several forms seem to have crossed back and forth over the Bering land bridge. They did not reach South America until only a few million years ago, where three of the four surviving species are found today.

The largest living tapir is the Malay Tapir of South East Asia (Tapirus indicus), which is about the size of a large pony. Like all living tapirs, it is an animal of tropical rainforest and loves the water. Tapirs are good swimmers and can hold their breath for several minutes, which is used as an escape tactic as a defence against predators – if attacked by a Jaguar for example a tapir will dive under water and stay down until the cat is forced to let go to breath. Malay tapirs have had in the past to cope with tigers, so they are sometimes a bit more aggressive in their defence strategies – certainly in zoos keepers are more wary of them than for the smaller South American forms. Malay tapirs are noteworthy for their black-and white pattern, although uniformly dark ones are sometimes seen.

The Malay tapir is probably the closest of living tapirs to the ancestral form, but when a relative crossed the Bering land bridge the various forms rapidly diverged. It is likely that only a single species reached South America, as the two entirely South American forms (the White-Lipped or Mountain tapir T.pinchaque and the Brazilian or Lowland Tapir T. terrestris) seem to be each others closest living relatives. The other species, Baird’s tapir T.bairdii is a mainly Central American species that is probably closer to the extinct North American forms.

Tapirs in fact survived in North America until the end of the last glaciation, when they and many other large bodied animals disappeared, in a time suspiciously close to the arrival of man in the Americas. In fact, very few of the large animals in North America today survived – those that are found are often recolonists from survivors in South America (like Mountain lions), or even invaders from Asia which did not spread over most of the continent until not long before the arrival of humans (such as Grizzly bears, which are the same species as the Eurasian Brown bear). One of the hot topics of North American conservation today is the reconstruction of extinct ecosystems by using the closest living relatives of the extinct forms. As far as I know, no one has suggested so far introducing tapirs, but I suspect Baird’s tapir (the closest to the extinct form) could probably survive quite well in the warmer parts of the US such as Florida and along the gulf coast states.

Tapirs are not very active animals in captivity, and a major problem for their health care is obesity. This is unfortunately compounded by poor diet in many cases – the term “concentrate selectors” has been applied to forest animals which pick leaves selectively, and this has resulted in a misapprehension that they are seeking especially high energy foods, which are included in the captive diet. In fact, such vegetation is not especially nutrient rich, and I suspect the main reason such leaves are chosen is that they have lower levels of toxins that plants use in defence against herbivores

The main diet of tapirs in the wild is foliage with some fruit, and like most herbivores they also frequent salt and clay licks to obtain vital minerals. They are more sociable than at first thought, and a given patch of forest will usually hold a pair and a few juveniles of various ages. The size of the home range depends on the quality of the habitat, and can range from 100 hectares to dozens of square kilometres. Tapirs are good climbers as well as swimmers, and are often found in mountainous areas where their tracks are used by other animals to get around the forests.

Although you do get ill-tempered animals which are unsafe to approach, our two Lowland tapirs, Denzil and Tamanga, are both placid creatures which love being scratched or curry combed by the keepers. They currently have another baby with them which was born in September, and which still has the stripes that baby tapirs have for camouflage. The stripes and spots will gradually fade by the time the calf is six months old. 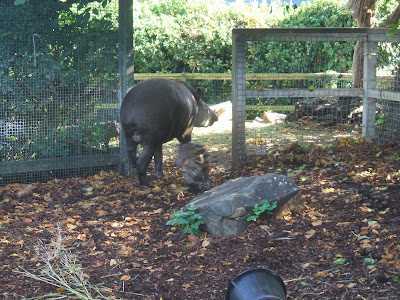 Unfortunately, tapirs are threatened in many areas as a result of habitat destruction and hunting. The only species that seems fairly safe is the Lowland tapir, the one most commonly seen in European zoos, whereas many of the others are down to only a few thousand individuals in the wild.

For more information on tapirs, and some ideas of how you can help them, see the Tapir Specialist group website at http://www.tapirs.org/ this has useful newsletters, husbandry guidelines, and reports from all over the world on these wonderful animals.