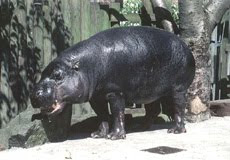 As I have done posts now on all the other hoofed animals we currently have at Bristol, I thought I would finish by a post on the sole remaining species, the Pygmy Hippopotamus.
There are only two species of Hippopotamus alive today, our own Pygmy hippos and the large River Hippo. As these are both confined to Africa, you might think that has always been the case. Go back as recently as the end of the last Ice Age however, and hippos could be found in many parts of the Old World, with a range at one time extending as far east as Java.
Hippos first appear in the fossil record in the Miocene, about 15 million years ago, when they already are plainly true hippos. Their ancestry is unknown, but it is generally believed that they derive from a group of fossil herbivores called the anthracotheres, which are an ancient group of both terrestrial and semi-aquatic animals that probably lost out to hippos, surviving in Asia until about 2 million years ago. Recent DNA work has shown that hippos are in fact the closest living relatives of whales, and as the oldest known ancestors of whales date back at least 60 million years it is plain that the hippo lineage has been around for a very long time.

The River and Pygmy hippos have quite different ecology, as they actually represent two distinct lineages.

The River hippo is the living representative of the grazing hippos, grass feeders which in warmer periods spread north into Europe – in fact bones almost identical to modern hippos have been found in the London area dating from the previous interglacial. They also colonised Mediterranean islands, becoming dwarf endemic species on Crete, Cyprus, Sicily and Malta. These island endemics were almost certainly wiped out by early human colonists – they certainly hunted hippos on Cyprus as remains of kill sites have been found.

Pygmy hippos are browsing animals, feeding on broad-leaved plants rather than grass, which require different teeth to chew effectively. The modern Pygmy hippo is confined to West Africa, where the population is probably in the low thousands – perilously low. They formerly were found in Nigeria, but the Nigerian subspecies is now extinct. Although usually placed in the genus Hexaprotodon, many taxonomists now place it in its own genus Choeropsis, restricting Hexaprotodon to the extinct Asian hippos. For more information on wild Pygmy Hippos, see the EDGE website here: http://www.edgeofexistence.org/conservation/pygmy_hippopotamus.php

At least 3 species of hippopotamus are known to have lived on Madagascar, two at least until quite recently, representing the grazing and browsing lineages. The grazing form, Hippopotamus lemerlei, has had bones dated to only 1,000 years ago. As with the Mediterranean hippos, it was basically a small form of the River Hippo. The Madagascar Pygmy Hippo, Choeropsis madagascariensis, was as the name suggests very close to the living Pygmy hippo, and seems to have mainly lived in the forested highlands of the interior, where the habitat was similar to that of the home of the Pygmy hippo today. Presumably it had rather similar habits – it certainly had a similar diet judging by its teeth.

Although both forms are now extinct, legendary animals clearly based on hippos are present in Malagasy folklore. They seem to have survived almost until recent times – in 1902 a colonial administrator named Raybaud asserted that stories he had been told implied to him they had even survived as late as 1878. This may be an exaggeration however.

From an animal husbandry perspective, although pygmy hippos are comparatively straightforward animals to keep, and breed reasonably well (although there is a rather high infant mortality), they are not the most popular animals with keepers. Partly this is because they are quite dangerous (even a Pygmy hippo has very impressive tusks), but the main problem is that they mark their territory by splattering dung all over the vegetation along their trails. In captivity, that means you have to wash down the walls daily.

Not many zoos keep Pygmy hippos as a result of the husbandry effort involved. According to ISIS, the current population in captivity in WAZA affiliated zoos is 222 animals worldwide, with 9 births in the last year. As the lifespan can be over 40 years, this is a reasonably stable population.

I am unaware of any mixed exhibits involving Pygmy hippos, and I am not sure they would be practical for the husbandry reasons just noted, but if any keeper or animal care student is reading this post I would like to suggest an idea for one. Whilst a Pygmy hippo/lemur exhibit could not be justified on current zoogeographical grounds, on taxonomic grounds it would be entirely reasonable:

Fantasy Exhibit #1: Old Madagascar
Description:
A heated walk-through aviary with pools for Pygmy hippos. Public have viewing access to the area, which connects to an outside wooded area via a submerged tunnel – this allows Pygmy hippos to exit the house at will while retaining the birds inside. There are separate inside quarters for lemurs and vivaria for Madagascan reptiles and amphibians. The outside area is surrounded by electrified wire and has an elevated walk through for the public at canopy height, thus isolating them from the pygmy hippos.

A report on the first research colloquium of the year – a study Bristol supported on the bats of Thailand.