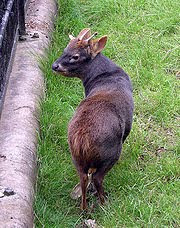 The only deer we have on show at Bristol (when they deign to show themselves at all) is the Southern Pudu, Pudu puda. One of only two species in the genus (the other is the Northern Pudu, Pudu mephistopheles} it is the world’s second smallest deer. (The Mouse Deer in Twilight World are technically Chevrotains, not true deer). The only smaller species of deer is the Northern Pudu). It is about half the size of the Southern Pudu, and there are none in any zoo affiliated to the World Zoo and aquarium Association (WAZA).

Pudu are derived from larger animals very similar to the North American White-tailed deer, which invaded South America about 4 million years ago. The same group also crossed the Bering land bridge into Eurasia, giving rise to the British Roe deer, which in many ways has very similar behaviour to Pudu although it is somewhat larger.

Southern Pudu stand up to 44cm at the shoulder with a maximum recorded weight of 13.4kg. They are solitary animals, communicating with each other and marking their territory with scent glands on their faces. There is usually a single fawn (sometimes twins) which is born in the spring and is independent at around 3 months old.

Pudu are browsing deer, feeding on a variety of leaves including bamboo, leaves of broadleaved trees, and herbaceous plants, plus fallen fruit in the autumn. As inhabitants of temperate rainforests, they are fairly hardy animals and aside from a shelter they can use if they wish they do not need any special heating in the winter. The main management issue is their vulnerability to stress – a problem with all deer species which is why conventional zoos tend not to have them on exhibit. Our Pudu are housed in a quiet part of the zoo away from noise.

Even so, Pudu are rare in zoos – there are no Northern Pudu listed on the ISIS website and the worldwide captive population in WAZA affiliated zoos comprises only 122 animals, of which 74 are in Europe. Bristol breeds them regularly, but in the last year our birth was one of only 13 worldwide – the lack of reproduction at other zoos in an animal that should be producing one fawn per female per year is rather worrying. Part of the problem is that zoos in range countries (mainly Chile and Argentina) are not affiliated to WAZA so the animals they hold are not included in coordinated captive breeding programmes.

Both species of Pudu are classed as Vulnerable on the IUCN redlist (see link at right), as a result of habitat loss, hunting and other persecution, although they can make use of secondary forest if undisturbed. Road kills are another problem that can be of consequence in some areas. The estimated population of Southern Pudu in the wild is around 10,000 animals. This is a 30% decline in the last 12 years, and a similar decline is expected in the next 12. There is some discussion of reintroduction schemes in various national parks in their former range where it has died out, but I am unaware of the current status of these at present.