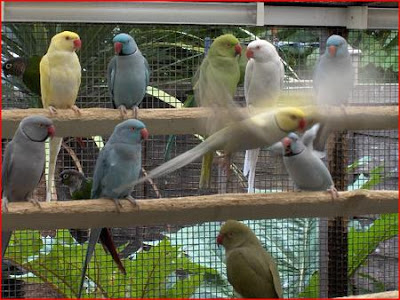 This week I went to the monthly Severn Counties Bird Society meeting (see link opposite). This is an avicultural society I have belonged to for several years. The society has monthly lectures or slide shows on (mostly) bird related topics, and a couple of shows each year. We also have various events during the year and have a stand at the Bath & West show in May.

This months’ talk was from a guy in Wales who specialises in breeding colour varieties of the Ring-Necked parakeet. This is a fairly popular aviary bird, which has a wide range across Africa and India. The talk covered all aspects of their care, including housing, feeding and genetics. The members were especially interested in two items of kit – a pretty good database system which enables tracking of family trees of the birds and the genetic makeup, medical history etc, and a useful black box which measures the heart rate of a chick still in the shell, which lets the keeper monitor whether a chick is alive, ready to hatch, or tiring during hatching and may be in need of help. 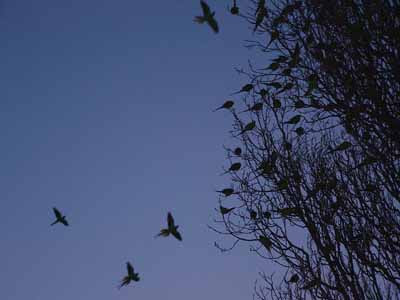 The Ring neck is an interesting bird from the point of view of this blog. First, it is the ancestor of the Mauritius Echo parakeet, which I will cover later, and it has established numerous feral populations worldwide, including Florida, California, and London. The London population is currently estimated at close to or above 10,000 birds. The largest roost is at Esher Rugby Club in Surrey (see photo)

Although urbanites do not have many objections to them, Ring necks are a significant agricultural pest in India, as their diet includes grain, fruit, and anything vegetable they can find. They also are potential competitors with native hole-nesting birds, although I am not aware of any impacts being noted so far.

The Ring Neck is only one of a successful and widespread genus of parrots, with a center of distribution in India but spreading to South East Asia. Many are popular aviary birds, although like all parrots they can be quite noisy, and are probably not the best bird to keep in built up areas. For more information look at http://home.wanadoo.nl/psittaculaworld/PsittaculaWorld.htm
Posted by Alan at 08:29

Email ThisBlogThis!Share to TwitterShare to FacebookShare to Pinterest
Labels: aviculture