Land of the Dodo Part 2 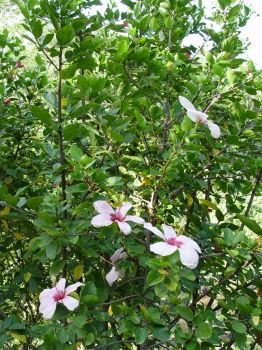 Part 2: Plants
The Mascarene islands have a huge proportion of endemic plants, all of which are threatened in various ways. Mauritius for example has 670 native flowering plants, of which 45% are endemic, plus ferns and fungi, many of which have restricted habitat. Many of these had important ecological relationships with the now extinct or highly threatened fauna, and introduced species have affected these in many ways. 150 of the native Mauritian species are listed as threatened as they are known from less than 50 individuals in the wild.

So how did this state of affairs come about?

Plants reach newly emerged islands in various ways, by wind, floating in the sea (for such species such as coconuts and probably screw pines Pandanus sp, of which there are several endemic species), or carried by birds or fruit bats.

However they arrived, unique local forms developed on each of the islands, which became covered, depending on local rainfall, in palm savannah or rainforest for the most part, with the higher parts of Reunion in heather moorland vegetation.

The longest distance that any Mascarene plant may have travelled is, improbably, a species of Acacia that lives at high altitudes on Reunion. Its nearest relative is found 17,000 km away, in Hawai’i. How it got there is made more clear by the fact that an endemic Reunion seabird, Barau’s petrel, seems to have evolved from the Hawaian Petrel, which breeds near or sometimes under the roots of the Hawaian acacia. Sea birds sometimes colonise islands surprising far from their birth place,

The most important trees in Mauritius are probably the various species of ebony, Diospyros, which can grow to 20m or more. These trees, related to the cultivated Persimmon which is in the same genus, were a major factor in human colonisation of the islands, as the wood was extremely valuable. Unfortunately the trees are dioecious, which means that trees come as either male or female plants, and several of the surviving forms survive mainly in single-sex groups, which obviously restricts regeneration.

One of the more famous (or infamous) trees is the Tambalacoque, Sideroxylon grandiflorum. Some years ago it was noticed that regeneration of this species was not happening effectively, and the story was dreamed up that this was because its seeds were designed to be spread by the Dodo, and without it the species was doomed. Actually, this is not true, and the true cause was that the fruits of the tree were being eaten by introduced monkeys who destroyed the seeds.

As well as these and many other forest trees, there was an extensive understory of shrubs, including several endemic Hibiscus species (some of which are in cultivation). Many of these flowering shrubs produce red nectar, and this is probably because it is an extra attractant to the plants pollinators, which are not as one might expect birds but are various species of day gecko, Phelsuma. However, small lizards are themselves prey for many other creatures, so the Phelsuma prefer to spend as much time as they can in the ferociously spiky Pandanus trees and bushes, which provide protection.

Introduced plants are unfortunately a major threat to the natives, Guava, Blackberry, and Privet are the most important weeds, which choke off other plants and prevent regeneration. Hybridisation with introduced ornamentals is also a threat to the native Hibiscus for example. A problem with control is that many of the fruits are eaten not just by local people, but by many birds and animals, including the threatened endemics.

The other main threat is introduced mammals. Rats feed on the seeds of many of the natives, severely restricting regeneration, and introduced deer especially browse heavily on native plants, which do not have the toxins in their leaves that plants on the mainland have to reduce browsing. The only threat the native plants formerly faced was browsing by tortoises, and many have vividly coloured juvenile foliage or spiny trunks to prevent this.

There are efforts to restore the native vegetation, but these are extremely expensive and labour intensive. Fencing will keep out deer, but hand weeding is required to remove guava, privet, and other introduced plants to allow the native trees and shrubs to grow. However, on small plots this has proved effective.

Another method is to subcontract the problem. On Isle Aux Aigrettes, an islet off Mauritius, Aldabra Giant Tortoises (which we have at Bristol Zoo) have been used to graze the native grasses and plants. This has the useful side effect that introduced plants top not have much defence against tortoise grazing and browsing, and as a result the balance is tipped in favour of the local plants. This has proved so successful that it is planned to introduce the tortoises to Round Island, where non-native plants are competing with the local natives.
(Picture at head of post - Hibiscus genevii in habitat)
Posted by Alan at 10:58