Today there are three native species of tailless amphibian in the UK, the Common Frog, Common Toad and Natterjack Toad. Even 20 years ago however there were four, and in Roman times there may have been as many as seven. This is the story of those lost species. 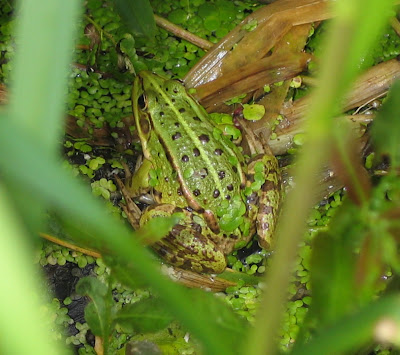 This is the most recent extinction, and particularly unfortunate as it could have been saved. However, these large, green, water loving frogs were believed to have been an introduction in the 19th century, and so no special measures were taken to protect them in their last site in the Norfolk Broads until it was too late.In the last few years a reintroduction project has been undertaken using frogs from Sweden, which are the most closely related to the extinct British form. It is not endangered on the continent, and with the closely related Marsh Frog P.ridibunda (which was introduced in the early 20th Century to Romney Marsh where it still survives) it hybridises to produce the fertile hybrid known as the Edible Frog, which was the main supplier of the famous French delicacy 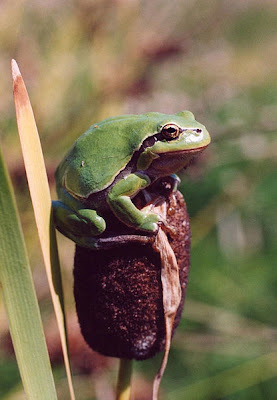 There is a possibility that this species may be, like the Pool frog, a neglected former resident. Several times (before it was made illegal) there were attempts to introduce this species to the UK, but one very old colony (now extinct) was known from the New Forest. Green Tree frogs are assumed to be a warm climate animal, but they reach the coast of France. The introduction attempts mostly failed or did not persist for long, probably because most of the individuals released were males, which are easier to locate by their calls, and also because the wrong habitat was chosen – the northern green tree frogs prefer shrubby or herbaceous vegetation and warm, fish-free pools to spawn in.

Unlike the previous two species, this does survive in the UK, with a single, highly threatened population on Jersey which Jersey Zoo is working to preserve. However, remains from 7th Century deposits suggest this long legged (it can jump 2 metres) relative of our common frog once also could be found on the UK mainland. As its centre of distribution is mainly France, with the Jersey individuals on the extreme north of the range, its loss from the UK was probably due mainly to the cooling of the climate during the post-Roman period. Its preferred habitat of wet grassland, woodland close to water and pools to spawn in are however classic Beaver habitat, and the loss of this from the UK may have had a knock-on effect on the remaining population 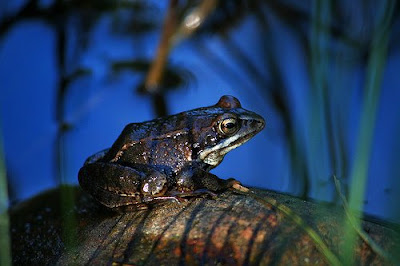 Known only from the remains of a single individual, this close relative of the Common Frog was probably never common in the UK. A primarily Eastern European species, with a preference for extensive shallow wetlands to breed in, the gradual post glacial transformation of the Norfolk Broads into a reedbed probably removed its habitat, and its preference for a more continental climate resulted in it dying out in the UK

These are the species known or reasonably believed to have been resident in the UK. However, it is becoming clear that the relatively small numbers of species of reptile and amphibian in the UK compared to mainland Europe are not simply a result of the formation of the Channel preventing them colonising, but also extinctions resulting from climate change, in particular a cooling of the climate in the last few thousand years culminating in the Little Ice Age. Amphibians have delicate bones, and small animals with restricted ranges or habitats may disappear without a trace. For example, Midwife Toads are in Germany mainly associated with Beaver dams, and the Yellow Bellied Toad prefers warm, shallow ponds or ditches. Small colonies of these species have bred on several occasions in the UK, and the Midwife Toad has survived in a colony in Bedfordshire for at least a hundred years. Possibly these were once also native in the UK?
Posted by Alan at 10:31

Email ThisBlogThis!Share to TwitterShare to FacebookShare to Pinterest
Labels: extinction