Land of the Dodo 3:Invertebrates 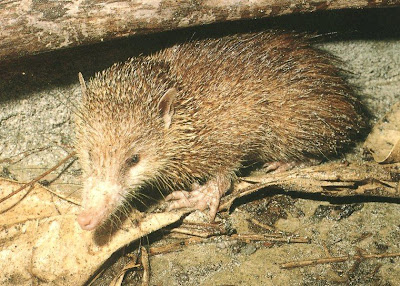 As might be expected of islands covered with tropical rainforest, the Mascarenes have a very extensive invertebrate fauna. As you might also expect from the habitat destruction and introduced predators on the islands, much of this is either extinct or endangered. The problem is compounded by the lack of any major surveys of the islands for invertebrates prior to the 19th Century, by which time a high proportion of the endemics were probably already extinct.

The main introduced predators are Black Rat, House Shrew, and Common Tenrec. (see above) These have been either introduced deliberately (like the Tenrec) or arrived with ships as stowaways. These novel threats have resulted in widespread losses, particularly of the terrestrial invertebrate fauna.

There was a significant diversity of endemic snails on the islands, a high percentage of which are extinct. Several species have also been introduced, notably Giant African snails, Achatina, and the just as ubiquitous Euglandina, which is a predatory species widely used in the mid 20th century for biological control of Achatina, and which has caused mass extinctions of native snails throughout the world tropical islands. It is possible that the effect of this on Mauritius is less than on , for example, Tahiti, as there were already endemic predatory snails on the islands before Euglandina arrived, so the native species would have been prepared to face that type of pressure.

There are still just about surviving the native Scolopendra centipedes. These are part of a widespread genus of often large and highly predatory invertebrates, and would have been among the top invertebrate predators. Recently rediscovered on Serpent Island is a large tarantula, which seems to feed extensively on lizards.

There is a large radiation of cockroaches, several of which are flightless, and an even bigger radiation of endemic beetles. Reported from Round Island was the flightless beetle Pulsopipes herculeanus, which we have at Bristol Zoo and is now found today known only from Fregate in the Seychelles, although it is known to have a distribution throughout the other islands in the group in the
past. (see image left)

There are also several species of endemic Phasmid on the islands – Reunion for example has four out of five know species as endemic – and an equally large number of endemic Lepidoptera. At least one species of butterfly on Mauritius, Salamis augustina, died out by 1957 because its food plant, the nettle tree, became extinct as a result of Achatina snails eating the seedlings and preventing regeneration. The species still survives on Reunion.
There is at present little conservation action directed towards invertebrates on Mauritius, Some of the native snails have been captive bred, but until the introduced predators, particularly the shrew, can be eliminated there is little habitat left to reintroduce. Part of the problem is that the introduced species interact – when on Isle Aux Aigrettes the rats were eliminated, the result was a plague of shrews, which were not even known to be on the island before then,

At least in theory, captive breeding programmes could be set up for the tarantula and a reintroduction attempted. Fregate beetles are already being captive bred and are a potential reintroduction for Round island. As the grubs feed on rotten wood however, this will either have to be imported or the reintroduction wait until the habitat recovery has advanced enough for there to be a sufficient supply of native dead wood top sustain the population.
Posted by Alan at 02:13