A Bit of a Boar

At the close of the last ice age, about 10,000 years ago, deciduous oak woodland spread over most of the British isles, shading into forests of birch and pine in the north. Living in those woods were perhaps 1,000,000 wild boar, Sus scrofa, making a good living from eating anything they found, especially acorns. Although they were hunted by people, they were not it seems favoured game animals – red and roe deer were far more popular judging by Mesolithic sites, probably because deer were easier (and safer) to hunt.

By the 14th Century however, wild boar were extinct as wild animals in the UK. There are references to them being hunted as late as the 17th century, but these seem to have been imported especially for hunting.

The reason for their disappearance was not in itself habitat destruction or hunting for food – they are prolific and adaptable creatures, and were in any case classed as protected by Norman landowners. The real reason was that they were simply a major agricultural pets. Not only did they eat crops (and in the Middle Ages losing your crop meant starvation), but they competed with domestic pigs. It was customary for peasants to have the right of “pannage”, which meant they could drive their pigs into otherwise protected forests, to feed on wild foods, especially acorns to fatten them up for the winter. As competitors, wild boar were a menace, and whatever the rules said were hunted to extinction.

And there the matter stood, until the late 1980’s and 90’s, when people realised that they actually tasted pretty good…

Soon, there were wild boar farms in several places, especially in the south of England. It was at this point, that people discovered something important about boar: they are really good at escaping.

Soon, there were reports in several places of wild boar living, and breeding, in the wild for the first time in 500 years. The closest population to Bristol, in the Forest of Dean, and there are other well established populations in Kent and on Dartmoor, plus other here and there. The official number in the Forest of Dean is “at least 50”, but given the size of the known founder population, it may be well over 900 or even higher, depending on the number killed by poachers.

As you can imagine, this has caused a good deal of controversy. On the one hand, they are an authentic part of our native fauna, and at least at present the numbers are more or less manageable. On the other, they are prolific, can carry serious animal diseases such as swine fever or foot and mouth, and could easily kill a dog. A sow defending her piglets is quite a formidable animal, and might even attack a human being. More likely is a car accident – several have already been killed on roads and running into an animal the size of an adult boar could easily write of a car (and possibly the driver) – although deer collisions are far commoner and more likely to occur, deer being prone to panic.

No final decision has yet been made about what to do about them – in the meantime, if you go out to the woods today you may get a big surprise… 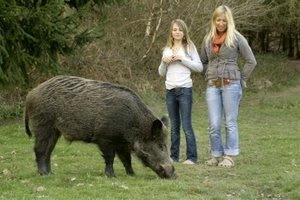