Land of the Dodo 4

Last of the parrots
When first discovered, Mauritius and the other Mascarene islands were home to seven different species of parrot. Today, only a single species, the critically endangered Echo Parakeet, survives, and another, the Indian Ring necked Parakeet, has been introduced to Mauritius The chief causes of the decline of the other species are not always clear, but hunting, habitat destruction, and introduced species, especially rats, are probably the main causes.

As far as is known, the endemic parrots all belonged to a group of Asian and African parrots called the psittaculines. Four species belonged to the genus Psittacula, like the Indian Ring-Necked Parakeet (see earlier post “An Interesting Evening”. The others belonged to unique endemic genera, probably closer to the living Eclectus Parrot of South East Asia. 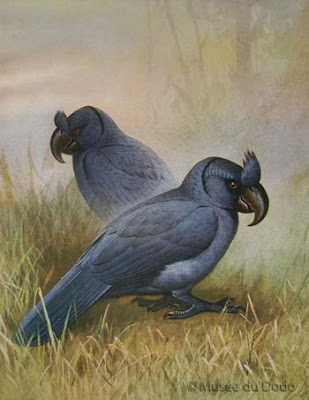 First to go was the largest, The Broad Billed or Raven Parrot of Mauritius, Lophopsittacus mauritianus. Often described as flightless, it actually could fly but was reluctant to do so, probably because it was so tame. No live animals made it back to Europe, and given the fondness of early mariners for parrots, this probably means it was a dietary specialist like the Hyacinthine Macaw or Kakapo, dependent on only one or two species of palm tree for successful breeding. The rats which arrived early would have been the main cause of its demise by competing for the palm nuts. Males were much larger than females, which suggest there may have been something odd about its breeding biology, but what that was can never be known. It was last reported in 1674. 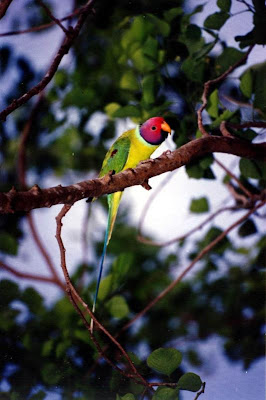 At about the same time Dubois’ parrot, Psittacula borbonicus, on Reunion vanished. There are few descriptions of this bird, but it is described as having a brightly coloured head, so it may have been similar to the Plum-head parakeet of India (shown here)

In the 1750’s two further species vanished. On Mauritius, Thirioux’s Grey Parrot, Psittacula bensoni, and on Rodrigues Leguat’s Parrot, Necropsittacus rodericanus both died out, followed by the Mascarin Parrot Mascarinus mascarinus on Reunion. The Mascarin had a body form similar to a living Eclectus Parrot, and live specimens did reach Europe. These species had survived rats, but the ongoing deforestation of the islands, especially removal 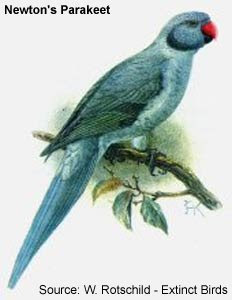 of tall trees which provided nest sites, were probably the main cause of their demise.

Finally, in 1874, Newton's Parakeet Psittacula exsul died out. This was probably also a consequence of deforestation. 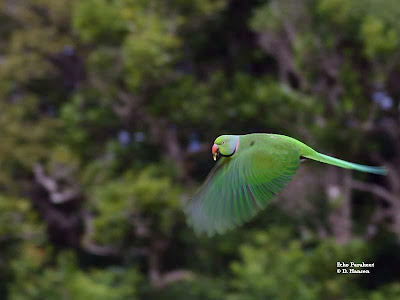 Still surviving however (just) is the Echo Parakeet Psittacula eques. Until the 1750’s it also occurred on Reunion, but twenty years ago it was down to perhaps 20 birds in the wild. With intensive care, captive breeding, and close attention to all nests, it is now up to perhaps 350 in total, which is still a critically low number, although its threat status has just been lowered from Critically Endangered to Endangered . It now also has to cope with its close relative, the introduced Indian Ring Neck. Although Echo parakeets probably originate from a colonisation of the islands by Indian Ring necks, they now eat different foods and do not hybridise. Unfortunately, they do compete for nest sites and Indian Ring Necks are a potential reservoir for disease. For a brilliant update on the state of the Echo, look at http://10000birds.com/its-all-about-the-echospart-one.htm
Next in this series: Tortoises past and present
Posted by Alan at 11:43