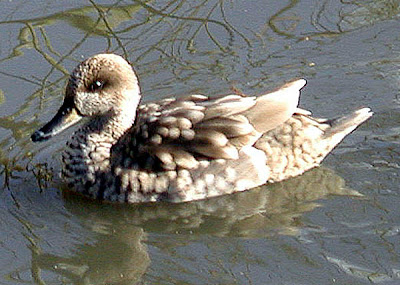 Just gone on show in the flamingo aviary at Bristol are six Marbled Duck (sometimes called Marbled Teal), Marmaronetta angustirostis. Although very teal-like in size (they weigh only 500g) and indeed in bahaviour, they are in fact a diving duck, related to the pochards, tufted ducks and canvasbacks. They have a large range, extending from Spain through North Africa to Iran, and wintering south into sub-Saharan Africa and North West India

The habitat of the Marbled Duck is temporary wetlands, often brackish, and with large amounts of vegetation. Their diet is a mixture of small seeds, aquatic invertebrates, and anything else they can filter from the mud. They usually feed early in the mornings and in the evenings, resting during the hours of daylight. Like most ducks, the female alone incubates the eggs, which are usually in a clutch of 10 or so, and cares for the ducklings. The nest is usually concealed in reeds.

Unfortunately, the specialised habitat of the Marbled Duck has been severely restricted, more than 50% having been destroyed in the last 100 years. The world population today is estimated as being below 20,000 birds, and possibly below 10,000. Conservation efforts are aimed at protecting existing habitat, and possibly habitat restoration where possible.

The species breeds well in captivity, and there are currently over 470 listed on ISIS, with 70 bred in the last 12 months.

Email ThisBlogThis!Share to TwitterShare to FacebookShare to Pinterest
Labels: zoo