Land of the Dodo 5: Tortoises then and now 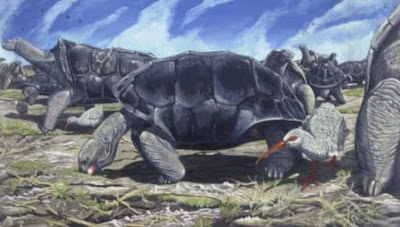 At the time of discovery, the Mascarenes were home to five species of giant tortoise. Mauritius and Rodrigues each had two, a saddle backed form adapted for browsing at higher levels and a smaller (c 12kg) domed form better shaped for grazing (most the others were probably in the 60-100 kg range). Reunion only had a single species, which was domed but considerably larger than the forms on the other islands. A painting by Julian Hume, who has done several paintings of Mascarene wildlife, is shown at the top of this post. 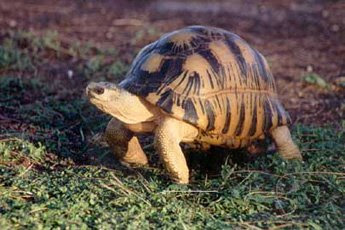 The various forms have all been placed in the endemic genus Cylindraspis, although they were formerly all placed in the widespread genus Geochelone, along with the Galapagos and many African tortoises. These have now all been split into separate genera. The closest living relative is probably the Madagascan Radiated tortoise Astrochelys radiata, which is about the size of the smallest domed form, the Rodrigues C.peltastes. (image from Cites website). Derived from the same ancestor is the Aldabra Giant Tortoise, Dipsochelys gigantea, which used to occur throughout the Seychelles.

The genus apparently first evolved on Mauritius, later spreading to Rodrigues and Reunion. One interesting feature is that their shells were extremely thin, as protection was not needed on the pristine islands from mammalian predators. As hatchlings, tortoises would have been preyed on by native birds, especially the endemic night heron, and land crabs would probably have also taken some.

The giant tortoises were the dominant herbivores on the island. Their grazing would have kept areas of grassland open, and their browsing strongly influenced the larger vegetation. Many Mascarene plants have vividly coloured juvenile foliage, designed to discourage browsing until the plants grow too tall to be eaten by tortoises, and many trees produce flowers and fruit at the base of the trunks, where tortoises could distribute the seeds.

The extinction of the tortoises was almost certainly caused by direct hunting pressure from humans. Vast numbers were taken from all the islands as a source of fresh meat on sailing voyages, and they were even killed for extraction of oil. The coup de grace was probably given by pigs (which ate eggs) and cats (which ate hatchlings).

What is especially tragic is that at least one species nearly made it. In 1844, a group of visitors on a scientific expedition to Round Island discovered survivors, and one member of the party “captured a female land tortoise in one of the caves on Round Island and brought it to Mauritius, where it produced numerous progeny, which distributed among his acquaintance”. Given the lifespan of giant tortoises, a hatchling in 1845 could even have lived to the present day.

Today, giant tortoises can once more be found living in at least semi-wild conditions on Mauritius. As part of the environmental reconstruction programme, Aldabra Giant Tortoises were released on Isle Aux Aigrettes, and have successfully bred in the wild. The effect on the vegetation has been highly beneficial, and plans are in development for their use on other offshore islands, possibly in conjunction with Radiated Tortoises.

At Bristol Zoo we have four Aldabra Tortoises, an adult male called Biggy who is at least 80 years old, and three females of which two are old enough to breed, although they have not so far shown signs of doing so. The latest arrival, “Matilda” , who at about 15 years is the smallest, is in the picture below. 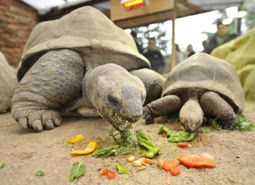