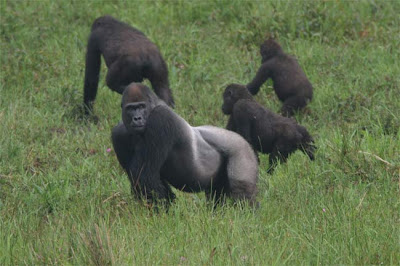 “Gorillas live in family groups of several females and offspring led by an adult male, known as a silverback from his distinctive hair” – that, at any rate, is the standard description you will see outside any gorilla enclosure in any zoo in the world. In reality, the actual situation is rather more complex.

For one thing, as I described in my previous post, gorillas are actually two species, the Western and the Eastern (including Mountain) gorillas. Unfortunately, until recently practically all knowledge came from studies of Mountain gorillas, and it is becoming clear that the Western Lowland gorillas do things differently.

Firstly, although it is true that all gorillas are born in a group, males often do not stay there. On reaching maturity, males will leave and live by themselves until they manage to acquire females to start a new group. Unsuccessful males will live their entire lives as solitary as orang-utans.

In some cases multiple male groups have been seen in both species, but this seems mainly to occur when a silverback dies and there are several sub-adult males among the survivors. Silverback gorillas are such powerful animals that for an adult male there are essentially no natural predators other than humans, so there is no need to band together for mutual defence.

In Mountain gorillas at least 40% of males do not leave, instead remaining with the silverback and joining a small core group of silverbacks in a much larger band. The largest of these groups so far observed had no less than seven silverbacks and the group was over 60 strong.

In a few cases groups with more than one silverback have been seen in Western gorillas, but these are very rare and in most cases seem to involve a father and son situation.

Females usually leave their birth group at around nine years of age, when they reach reproductive age. They may join a lone silverback to start a new group, or they may join an existing group. Even when they join a new group, they may not remain there, especially if they lose an infant.

Recent work on habituated Western gorillas shows an interesting difference between them and Mountain gorillas. Whereas Mountain gorillas are fiercely protective of their females and invariably attack any unknown males they encounter (sometimes with fatal results), Western gorillas seem to associate much more peacefully, even allowing females to sit next to a silverback from another band and then return to their own family. Examination of DNA shows a possible reason – it appears that the silverbacks in these cases are closely related and probably grew up in the same band. It appears that the dispersal of males from Western Gorilla bands may be an illusion – they remain close to the birth groups and in touch with their erstwhile companions. This raises an interesting possibility – that the true nature of Western gorilla society is not the single band but a network of family groups – a sort of “suburbia” if you like,
If this is the case it has implications for how Western Gorillas are looked after in zoos. Although the focus of all management is on creating a single breeding group, it might be better to aim for much larger facilities holding several groups (preferably led by related silverbacks) with facilities for holding non-breeding males either by themselves or in bachelor groups in at least visual contact with their former families
Posted by Alan at 03:22