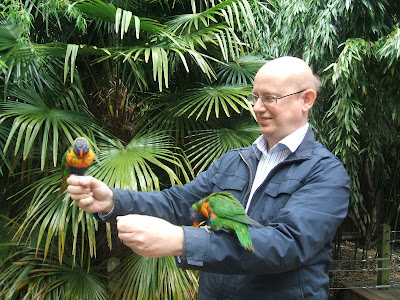 Opening this weekend is Bristol Zoo’s newest exhibit, a walk through aviary for 30 Rainbow lorikeets (Trichoglossus haematodus moluccanus). These colourful and acrobatic members of the parrot family belong to the group of parrots known as the lories. There is no scientific distinction, but “Lory” is generally used for short tailed members of the group and “Lorikeet” for the longer tailed species.

The Rainbow lorikeet (sometimes called the Green-Naped Lorikeet) is a widespread species with at least 20 subspecies, some of which are probably full species. The range is throughout Indonesia, New Guinea and northern Australia, and it has also been introduced to Western Australia and New Zealand, where it has been classed as a pest because the birds not only feed on orchard crops but also compete with native species of lorikeet. The wild population is estimated as at least 5,000,000 birds, although some subspecies are threatened, for example the Bali lorikeet T. haematodus mitchellii.

It is an adaptable species, freely using coconut plantations or settlements as well as rainforest. Lories and lorikeets are, to various degrees, specialists in feeding on pollen and nectar, although they also take plant buds and fruit, especially wild figs. In order to track down flowering trees, lorikeets are nomadic, which probably accounts for their wide distribution.

As with almost all parrots, lorikeets nest in holes in trees where the female lays two or three eggs. The young fledge at about 60 days.

In captivity, lorikeets are fed an artificial nectar mixture which needs to be supplied fresh several times a day. In addition they receive fresh fruits such as apple and grapes, and must always have access to clean water as they are extremely fond of bathing. Lorikeets lack the muscular gizzard to grind up seeds, so although they will take them it is not good for them.

Although lories and lorikeets of various species are widely kept and bred by private individuals, their specialised diet means that they require much more intensive care and specialised knowledge than the more commonly kept seed eating species of similar size such as cockatiels. In addition, they are quite noisy birds so a keeper needs sympathetic, or preferably distant, neighbours!

In our exhibit, visitors will be able to buy a small cup with a dab of artificial nectar and on entering the aviary the birds will come down to feed from their hands. I went on a practise run for this last week and after a wait (they had just gone into the aviary so they were still getting used to the new surroundings) they came down to feed. Visitors beware however – they will also land on your head!
Posted by Alan at 11:06