Land of the Dodo 9: Rails 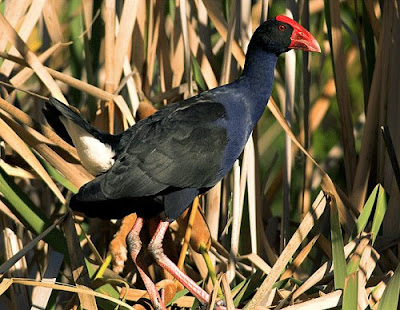 One of the most successful groups of birds to colonise oceanic islands are the Rails, the group of birds which includes coots, moorhens, and gallinules. Invariably terrestrial, and usually secretive, they do not look like good long distance flyers, but they are surprisingly good at finding and settling down on remote atolls.
Unfortunately, having done so, they frequently (and often rapidly) tend to become flightless, which means that extinct rails are a major feature of the history of human colonisation of the worlds’ islands.

The Mascarenes had at least six extinct species, which roamed the thickets and grasslands of the islands feeding on invertebrates, especially snails (snail shells show the distinct signs of being broken open by powerful beaks), crabs, and in the case of the largest species possibly even baby tortoises. This did not help them against rats, cats, and mongooses – all were gone by 1720 at the latest.

The picture at the top of this post is of a Purple Swamp hen, Porphyrio, which is the probable ancestor of a bird, the "oiseau bleu" formerly found in the hills of Reunion. Unfortunately no bones have yet been found, but the description fits very well and this species is very widespread in Africa and southern Europe (it has also been introduced to the Everglades). Birds of this type also colonised New Zealand, evolving into the highly endangered flightless Takahe.

The most specialised (and probably oldest endemic species) was the Red Hen, Aphanapteryx. This has caused some confusion, as after the extinction of the Dodo the name was transferred to the Red Hen, and consequently people believed the Dodo survived longer than was in fact the case. The Red Hen had silky feathers, similar to a Kiwi, although in no way related. 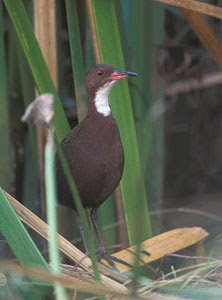 Three endemic species of Wood Rail, Dryolimnas, inhabited the three main islands. These were local forms of the Madagascan White-Throated Rail, which has a flightless race still inhabiting Aldabra. 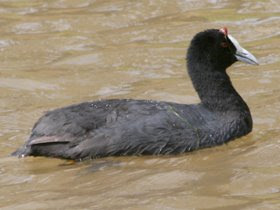 The Mascarene Coot, Fulica newtoni, was close to the Crested Coot of Africa and Spain. The reason for its extinction is unclear – Coots are usually well able to take care of themselves. However the available habitat for water birds is limited on the islands, so habitat destruction by early colonists was probably a major factor. 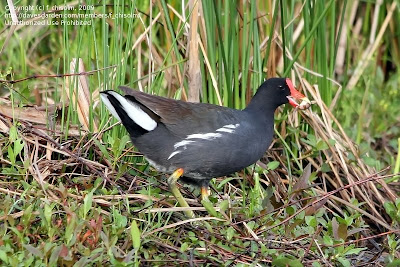 Finally, a new arrival reached the islands in the late 18th Century, probably from Africa. Common Moorhens, Gallinula, the same species that is found in Europe and the USA, have now become widespread in the islands. There have been reports in the past of White-throated Rails reaching the islands from Madagascar, so it is still possible that new rails may yet colonise the islands.
Posted by Alan at 12:32