Return of the Crane 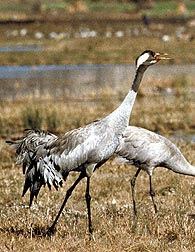 Back in 1981, I was on a bird watching holiday in Norfolk in the east of England. It was the last day, and we had gone into the Norfolk Broads to see what we could add to our list for the week. It was a very foggy day, but we stopped to see what we could find in a field, soon locating a few Golden Plover. At this point, we heard an unfamiliar trumpeting sound coming from the low clouds, and Brian Bland, who was leading the group, immediately said “Those are cranes!” Naturally, we were surprised by this, as Eurasian Cranes are scarce passage migrants in the UK, but we looked towards the approaching sound and made out three cranes which came and landed only a few hundred metres from us. They were not adults however, but a pair with a just fledged chick – the first to be bred in the UK since the 17th century.

It still remains the greatest birding experiences of my life.

Eurasian (they are usually called Common) Cranes are indeed one of the worlds commonest species, with an estimated world population of perhaps 275,000 birds and a range from western Europe to eastern Siberia, but in Britain a combination of drainage of wetlands for farmland and hunting for food (they were a centrepiece of medieval banquets) resulted in their extinction as breeding birds, only showing up when migrants wintering in France and Spain passed through on their way north to Scandinavia and Siberia. A few years before my sighting, a young pair had taken to hanging round Norfolk, and when they apparently vanished in the spring there was much speculation – which happily proved to be correct.

Unfortunately, there is comparatively little breeding habitat available at the original site, and the population since then has grown very slowly, now numbering perhaps 20 or so individuals, despite other wild birds having been attracted to the site to join the founders. For that reason, it has been decided to attempt to establish another population using captive raised birds from wild laid eggs. The first site for the attempt has now been announced as the Somerset levels not far from Bristol.

The project is being coordinated by the Wildfowl and Wetlands Trust at Slimbridge, and when I went there today some of the previous year’s juveniles and subadults were on show. Some of these, plus ones raised in the next year or two, will be transferred to a predator free soft release pen on the levels, in which it is hoped they will eventually breed and establish themselves in the area. Roger Tippett, the president of the Severn Counties Foreign & British Bird Society (see link), gave a very interesting talk on his work as a volunteer at Slimbridge in the Crane School they run each year. Roger will be at the SCFBBS stand at the Royal Bath & West Show this Saturday (as will I) – come and have a chat if you are visiting!

For more information on Cranes, see the WWT trust release here: http://www.wwt.org.uk/text/464/eurasian_cranes.html
Posted by Alan at 13:45