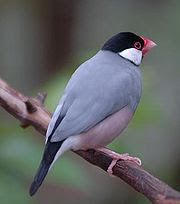 Recently added to the Wallace aviary birds here at Bristol is a small flock of a very pretty small songbird, the Java Sparrow. They are kept because they pose an interesting example of how species can be at the same time threatened in one area and a potential pest in another.

Originating, it is believed, in Java and Bali in Indonesia, their popularity as cage birds means that they have been taken throughout neighbouring islands and more recently all over the world – there is for example a well established feral population in Hawaii. They are also popular in aviculture – I have a few in my aviary in my back garden right now – as they are extremely easy to care for and always present an incredibly smart appearance (bar a few weeks a year during the moult).

Javas (Also know as Rice Birds), have the scientific name Padda oryzivora. Oryzivora means “Rice Eater”, which will give a clue as to why they were persecuted in their homeland. They are extremely prolific, and as a result were major crop pests.

Javas are an estrildid finch, in fact the largest living species, and as such belong to a group of small, mostly grass-seed eating birds, which include several other popular cage birds such as the Zebra finch, Bengalese, and Gouldian finch. The basic ecology of this group of birds is to subsist as adults mainly on ripe and ripening grass seeds, supplementing with some other vegetable matter, and feeding their young on insects and unripe seeds. They often have large broods of young and in the right circumstances can increase their numbers very quickly. The downside of this is that they tend to be short lived in the wild, so adverse situations can result in equally rapid declines. Their main natural predators are probably snakes and small mammals when nesting, and birds of prey once fledged.

In recent years the Java sparrow has faced such a decline – in fact it is classed as Vulnerable on the IUCN Red List – and a recent survey could only locate 109 individuals at 17 sites. In addition, persecution in those areas where it has been introduced has resulted in declines amongst feral populations. The most probable cause is persecution by farmers, capture for the cage bird trade (although this is completely unnecessary as they breed well in captivity), and possible competition form the Tree Sparrow Passer montanus, which is the common city sparrow in Asia.

Javas were at one time introduced to Mauritius, undoubtedly as cage birds, and were breeding in the wild by the 1750’s. However, later persecution and probably competition with House Sparrows resulted in their extinction in the early 20th century.

Closely related to the Java sparrow is the Timor sparrow Padda fuscata from, as you might guess, the island of Timor. Timor sparrows are much less common in aviculture, although also threatened, but are dark brown where a Java is grey. It is currently more common in the wild than the Java, although it faces the same threats and is consequently classed as Near Threatened by the IUCN. 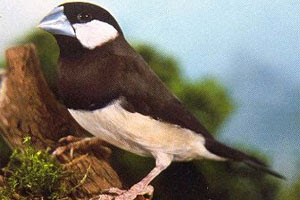 The conclusion of all this is that even the commonest species can be much more threatened than it looks, especially if it relies on groups for survival. Most people will be aware of the catastrophic collapse and extinction of the Passenger Pigeon – it is important therefore to build up as wide a knowledge of all species, both in the wild and in captivity, as it is possible to arrange.

If you wish to learn more about these beautiful little birds, look at the Java Finch Society website www.javafinch.com
Posted by Alan at 12:24