Land of the Dodo 13: Bulbuls 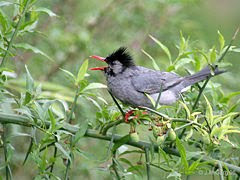 Scattered from Asia to Madagascar, the Black Bulbuls of the genus Hypsipetes comprise nine surviving species, of which two survive in the Mascarenes, on reunion and Mauritius. An additional species, not yet formally named, is known from fossil remains on Rodrigues and died out either before or shortly after first contact – there are no surviving accounts of it known.

Bulbuls are medium sized, largely fruit-eating birds, supplementing their diet with insects, especially when breeding. The nest is an open cup, built in a bush or tree, and in general they can be thought of as the Asian equivalent of common European and American thrushes.

The Hypsipetes bulbuls of the Mascarenes seem to have originated from Asia, initially via the Seychelles. From the DNA evidence it appears that the Mascarene birds then went on to colonise Madagascar, which in turn then spread out again to the Comoros, where two species now occur – one originating from the wave that colonised the Mascarenes, and a second derived from the Madagascar Black Bulbul Hypsipetes madagascariensis.

The Reunion Bulbul H.borbonicus (called a Merle there) is still common, but the birds are more easily heard than seen. I was unable to locate any decent photos of either of the Mascarene species, so the picture at the head of this post is the common Indian Black Bulbul Hypsipetes leucocephalus.

Unfortunately the Mauritius Merle H.olivaceus is in a far worse state. The current population is under 300 pairs, which is far too low to be secure, but at least at present the population appears stable. The probable reason for its decline is habitat destruction, and it is hoped that the restoration projects currently under way will help to foster an increase. 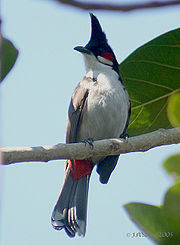 Unfortunately, one obstacle to this is an introduced species, the Red-whiskered bulbul Pycnonotus jocosus. This is a fairly common cage bird, and has been introduced to both Mauritius and (more recently), Reunion. This has the potential to compete with the Merles, especially in human-modified habitats, and possibly act as a reservoir of disease. In addition, introduced predators such as rats may predate on nests.

Aside from habitat restoration, there is currently no specific conservation interventions aimed at benefiting the Mauritius bulbul. Some related species are however kept, and sometimes bred, in a few zoos, which provides a baseline of avicultural knowledge if a captive breeding programme for any of the Mascarene species is required, or possibly a re-introduction of a related species to Rodrigues.