Land of the Dodo 14: The other land birds

Aside from the land birds mentioned in previous posts, a further eight species of land birds are known from the Mascarenes, of which one is extinct. This was the Hoopoe Starling Fregilupus various, which became extinct in the mid-19th century. The cause of the extinction is unclear – it was apparently a generalist feeder and suitable habitat still appears to be available. Possibly deforestation and removal of trees with holes for nesting was the cause, but introduced disease must be a prime candidate. Island animals, because of their inevitably small populations, do not have as large a reservoir of disease resistance genes as continental populations, so they are permanently vulnerable to new diseases.

One of the only two surviving land birds on Rodrigues is the Rodrigues Warbler, Acrocephalus rodericanus. This is closely related to the Seychelles warbler, and belongs to a very successful genus of small insectivorous birds which combined have a gigantic range – at least 38 species are known of which two, the Reed and Sedge warblers, are common British birds and several others are know as either scarce breeding birds or regular vagrants to the UK. The Rodrigues warbler has had a good deal of protection and the population is currently at several hundred birds

Found only on Reunion is the Reunion Stonechat Saxicola tectes (shown below). Stonechats are another widespread group of birds, which have been recently split into several species. The Reunion stonechat is a fairly common species at higher elevations, where it frequents the cloud forest and giant heather heath land. It probably evolved from the Madagascar Stonechat S.axillaris, but stonechats are long-distance migrants so the founders could have come from further afield. 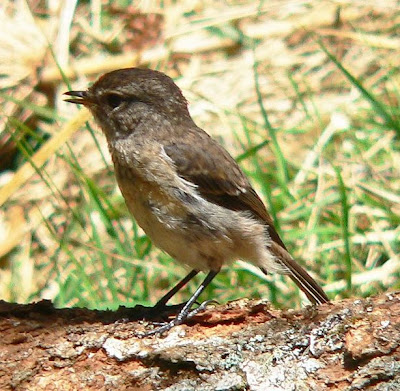 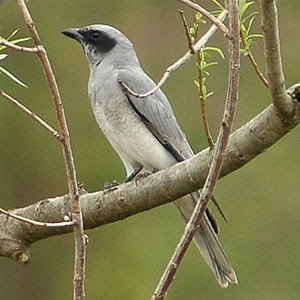 ound on Mauritius and Reunion are two species of Cuckoo-Shrikes (Coracina typica and C. newtoni). These feed in the canopy on large insects and lizards. Their origin is uncertain, but they resemble Cuckoo-Shrikes found in Australasia. (shown here, Black-faced Cuckoo-Shrike C.novaehollandiae)

Finally, there are three species shared between Mauritius and Reunion.

The Mascarene Swallow Phedina borbonica is also found on Madagascar, where it is partly migratory, so its presence on Mauritius is not hard to explain. The population on Mauritius at least is small, in the low hundreds at best.

The Mascarene Paradise Flycatcher Terpsiphone borbonnensis feeds low in the under story on small insects. It is very rare, but surprisingly on Mauritius it seems to be breeding successfully in forestry plantations. 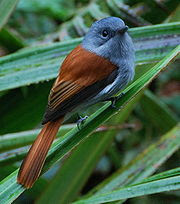 Finally, least studied of all the remaining land birds is the Mascarene Cave Swiftlet Aerodramus francisus. Possibly derived from the Indian Cave Swiftlet, it suffers from the tendency of Mauritians to regard lava tunnels it requires for nesting as convenient sites for dumping rubbish. 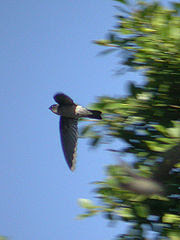 (All images from Wikipedia)
Posted by Alan at 12:26