Land of the Dodo 15:Seabirds 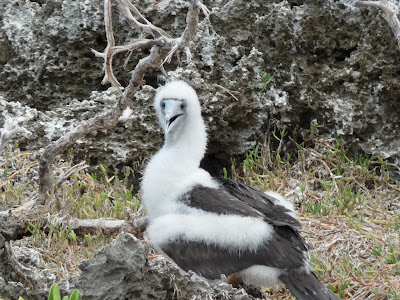 When the Mascarenes were first discovered, the main islands did not have an extensive diversity of breeding seabirds, but offshore islets had some colonies of many species. These were often raided for eggs and young birds for food, and the burrow-nesting petrels are highly vulnerable to rats, which together have resulted in local extinctions of some species. A few of these have re-colonised naturally, but some others have been lost and world populations are now so low that it is unlikely that new colonies will be formed on the islands without outside help.

Currently only visitors to the islands are Greater and Lesser Frigate birds Fregatta sp., of which at least one species was reported as breeding when the islands were first discovered, Great Crested Terns Thallasseus bergii, and various Indian ocean gulls and terns, plus some Palaearctic migrant waders making stopovers, such as Ruddy Turnstones. Pelicans were reported offshore in 1598, probably Pink-backed Pelicans Pelecanus rufescens (which we have here at Bristol), which formerly bred in the Amirantes atolls north of Madagascar.

Three species of boobies formerly bred in the Mascarenes. One species just holds on, the Masked Booby Sula dactylatra, which breeds on Serpent Island. Red-footed Boobies Sula sula bred on Rodrigues until the 1870’s. The most important species however was the tree-nesting Abbott’s Booby, Papasula abottii (shown at top) which was probably both persecuted for food and also lost nesting habitat to deforestation. Abbott’s booby was ever only found on four stations, but today only a single breeding colony on Christmas Island remains, and this is too far away and too small to provide potential recolonists. 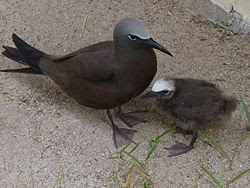 Several species of terns are found in the Mascarenes, some of which have recolonised after becoming locally extinct. The commonest are the Brown and Lesser Noddy, with Rodrigues also having colonies of Roseate Tern, Sooty, and Fairy Terns. 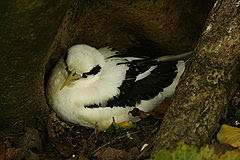 Two species of Tropicbird can be found on the islands, the inshore White-tailed Tropicbird and the more oceanic Red-Tailed Tropicbird, with the latter being the more common. They are increasing under protection and also benefiting from the recovery of the vegetation on Round Island and other seabird islets now that goats and rabbits have been removed.

The most important of the seabirds on the islands however are the various species of petrels. Petrels mostly breed in burrows, mostly only coming ashore after dark, so they are very hard to study. The Reunion Black Petrel Pseudobulweria aterrima appears to be a very rare breeder, and the breeding site was only recently located. Only once reported prior to the 19th century, it was probably always rare. It is part of a group of species which are otherwise found in the Pacific except for an extinct species from St Helena in the Atlantic. By contrast, the Wedge-Tailed and Tropical Shearwaters Puffinus sp. are both still fairly common, although Tropical Shearwater is extinct on Mauritius. 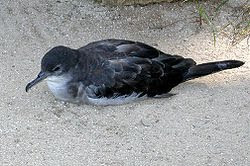 With the recovery of the vegetation in recent years, the situation on Round Island has become complex. Originally only a single species, the Round Island Petrel, believed to be a local form of the Trinidade Petrel Pterodroma arminjoniana, was known, but in recent years two other species have colonised, Bulwer’s Petrel Bulweria bulwerii, and Kermadec Petrel Pterodroma neglecta. The Kermadec Petrels sometimes hybridise with the Round Island Petrels, and it appears that a hybrid swarm of mixed parentage is forming. Both the Kermadec and Bulwers’ petrels appear to be new colonists of the western Indian Ocean.

This situation however is not unknown amongst seabirds, and sometimes islands are colonised from considerable distances away. One such colonisation probably resulted in the Reunion nesting Barau’s Petrel Pterodroma baraui. This appears to have been derived, however unlikely this seems, from the Hawaiian Petrel. Even more unlikely, these colonists seem to have brought with them on their feathers the seeds of a specialised shrub, Acacia koa, which itself has evolved into the Reunion endemic species Acacia heterophylla. On both Hawaii and Reunion the petrels and the acacia are closely associated, living at high altitudes on the slopes of the volcano.

Until recently, seabird conservation in the Mascarenes has involved only protection from persecution and habitat restoration, but attempts are just starting on direct reintroduction. One might wonder how this can be done, since seabirds all leave the breeding sites after fledging, usually for several years, but the secret is to take advantage of the tendency of fledglings to imprint on their birthplace, which in the case of petrels is whatever they see when first leaving the darkness of the burrow. In addition, many seabirds do not have post-fledging care – the chick, which at the point of fledging has a large amount of fat stored, makes its own way to the sea and teaches itself to fish. Currently being attempted are translocations of such fledglings to Isle Aux Aigrettes, with the hope that such birds will return to nest in later years. If these prove successful, possibly even Abbott’s Booby may be reintroduced at some time.

Images from Wikipedia from top: