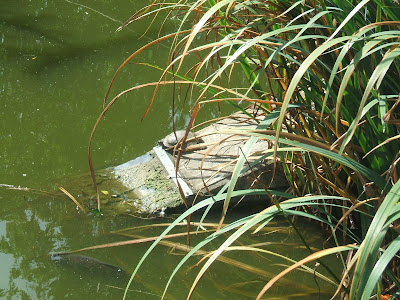 Living in the lake here at Bristol Zoo we have a sizable number of Red-Eared Sliders, Trachemys scripta. They often sun themselves on the lake islands or can be seen swimming close to shore, where they may even come up and take food being offered to the ducks. These American terrapins are unfortunately found in many water bodies in Britain, especially in the south, although they can survive surprisingly low temperatures.

These are mostly a legacy of the Teenage Mutant Ninja Turtle craze of a few years ago, although I can recall hatchlings being sold in pet shops well before that took off. Ours are the result of rescue donations years ago. They are said not to be able to breed successfully in the UK, although that may not be entirely correct – our females lay eggs most years on the lake islands and we have found hatchlings on at least one occasion. However, in general our summers are not hot enough for long enough for the eggs to successfully incubate.

Terrapins are omnivorous animals, taking plant material, especially as adults, but also insect larvae, water snails, and scavenging, but they are also more than capable of catching fish or even sometimes ducklings. As a result they are a potential risk to wildlife wherever they are found. Of course, they have also been introduced in many parts of the world and are a potential threat to many other species of aquatic turtle, both through competition for food and also for basking and nesting sites. 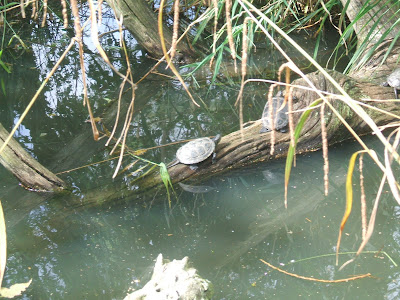 What many people in the UK are unaware of however is that at one time we had our own native terrapin – the European Pond Terrapin Emys orbicularis. In the warm, dry spell after the end of the last ice age this rapidly colonised northern Europe, and subfossil bones from Norfolk show that it reached south east Britain at least., as subfossil remains have been found dating to 3000 BC. The reason for their extinction was probably climatic – the weather began to cool about that time and the British climate became much more like it is today. Even with the long lifespans of chelonians, a sufficiently long stretch of cool summers would have been sufficient to prevent an entire generation from successfully breeding. Today the nearest colonies are in central France and Germany, and even those often fail to breed in cool summers.

Attempts to introduce European Pond Tortoises to Britain were made in the late 19th and early 20th centuries. In 1894-5 a number were released south of Saxmundham in Suffolk, young were seen in 1929 and in spring 1932 a subadult was seen. Numbers were released at near Haslemere in Surrey between 1905and 1910, nine were captured in the same area in 1948, which may have been their descendents.

Despite all the above, it is very unlikely that any self-sustaining populations of either species is currently present in the UK. However, this is not the case in other parts of the world, and Trachemys scripta is one of the most widespread of chelonian species as a result of the pet trade. How much actual effect it has on other species is unclear – the main problem is likely to be as a result of competition with other species of terrapin where it has been introduced. In this connection its presence in China, where native terrapins are under considerable pressure from human activities, is of grave concern. Aside from China, Trachemys has also been introduced to Australia, South East and Far East Asia, Europe (there are reports from Spain, France, Cyprus) the Caribbean, Israel, Bahrain, Mariana Islands, Guam and South Africa.

Top: Trachemys scripta at Bristol
Below: Emys orbicularis at Twycross
Posted by Alan at 08:05