Butterflies of Bristol 7: The Whites and Yellows 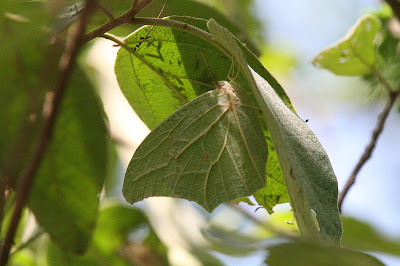 Most of the butterflies with a mainly white or yellow background colour to the wings that you will see in Europe belong to the vast and widespread family of butterflies called the Pieridae. Examples that British people will be familiar with are the Large and Small Cabbage Whites, the Brimstone, and the several species of Clouded Yellows. Note that the Marbled White however is a nymphalid, and is related to the various Brown butterflies.

Pierid butterflies feed on a wide variety of food plants, but a large proportion of the European species feed as caterpillars on members of the Cruciferae (the mustard or cabbage family). The Clouded Yellows however are associated with members of the Leguminosae, especially Lucerne(alfalfa in the US).

We occasionally have pierids on show in the butterfly house, but they are not especially prominent – they are short lived butterflies compared to most species we have and they tend to fly quite high rather than hover over flowers. Check out the roof and you may see them perched on the ceiling.

The most likely species that you will see is the South American White-Angled Sulphur, Anteos clorinde. This closely resembles the European Brimstone butterfly, and is a resident from Mexico south to Argentina, but it is also a regular migrant to the southern US, occasionally travelling as far north as Nebraska. The main food plant is Senna, from which the laxative senna pods are produced.

From Africa we also sometimes have the Albatross butterfly, Appias lasti. The genus Appias is widely distributed from Africa across to Australia, and numerous species have been described. Unfortunately, as with many butterflies and other insects, very little is known about the detailed ecology and behaviour of this species, except that the food plant for the larvae is reported as being Capparis and probably other related species in the caper family. Capparaceae.

For all their apparent fragility, the pierids number among the most successful and widespread of butterflies. Many species are resident, but many are prodigious migrants, travelling huge distances. Each year for example Britain received migrants of Large Whites and Clouded Yellows, and amongst them are less common species such as the Pale Clouded Yellow. These originate from around the Mediterranean, where they breed over the winter months in the Lucerne fields and then migrate north in the spring. Presumably there is a return migration, but this is seldom observed. With warmer weather in recent years it is possible that some of these migrants may establish themselves as residents, at least in the south of the UK.
Posted by Alan at 06:44