This months research colloquium was by Professor Lisa Gould of the Anthropology Department, University of Victoria, Canada. professor Gould has been studying Ring_Tail lemurs for longer than almost anyone else in the world, and gave a very interesting talk on one of the world's most instantly recognizable primates.

With its distinctive appearance and readiness to breed in captivity, the Ring-Tailed lemur, Lemur catta (so named because of its cat-like call) is the most instantly recognizable and well-known of Madagascar’s native primates. Just because it is well known in zoos however, is no measure of the knowledge of the species in the wild, and this month’s research colloquium had some intriguing, and even slightly hopeful, information.

The Ring-Tailed lemur is plainly a very atypical lemur in many respects. Whereas almost all lemurs are arboreal forest animals, Ring-tails are semi-terrestrial, in some habitats spending as much as 70% of their time on the ground. They are also very adaptable in the habitat they can use, from gallery forest along rivers to rocky slopes, abandoned farmland, and basically anywhere they can find food and water. They are also quite variable in their behaviour, as studies at Anja reserve by our speaker have shown.

Up until now, most studies of wild Ring-tails have been in gallery forest, where a major component of their diet is the large pods of the tamarind tree. These large food items are worth fighting for, especially when food is scarce, and as a result territorial fights between bands and aggression between individuals is common. At Anja, the situation appears quite different.

Anja reserve was set up by the local community (a long-overdue initiative) rather than by outsiders, and its manifest benefits to the local community means it is likely to prosper. When the reserve was set up deforestation had caused drastic damage to the local environment, and the local population of Ring-tails was perhaps 40 animals. There was a major reforestation initiative, focussing on food plants that the lemurs prefer, especially the small Melia berries. As a result of the reforestation, the local streams (which had been drying up instead of flowing year-round, have returned to full-time flow, and the local rice farmers have benefited, and a fish-farm has been set up. In addition, Anja’s location near a main tourist route means that it has become a regular stop for tourists, resulting in a great increase in the local average income. The Ring-tail population on the other hand, has grown to 150 or more individuals.

For a video of the lemurs at Anja, see here: http://www.youtube.com/watch?v=xpfE2mBfeJo

At Anja, the small but abundant berries of the Melia bushes are too small to fight over, and the abundance of food means that the lemurs do not need to be as territorial as in gallery forest. The plentiful food supply means that they are also able to have more infants than in gallery forest. In that habitat, Ring-tails usually have baby every other year on average, and never have twins. At Anja, annual births are usual and twins are common – in fact the same reproductive rate as is found in zoos. The density of the population is also much greater – in gallery forest it averages around 2 animals per hectare, but at Anja it is over 6, yet with no aggression.

The reason for this plasticity in behaviour is the environment to which Ring-tails are adapted. They originate from South-Western Madagascar, where the environment is very harsh and droughts are common. As with many animals adapted to extreme environments, their biology is keyed to maximise productivity when times are good, to compensate for the losses in harsh seasons. In addition, an animals which lives on the dge has to make the best of what it can get, and Ring-tails can feed on a wide variety of food sources, although in any given environment they will of course have favourite foods.

All this explains why so many zoos hold Ring-tails, even as other lemur species are hard to keep. When an animal with a reproductive biology keyed to breed whenever sufficient resources are available is maintained in captivity, the abundance of food and comparatively low mortality tends to result in a population boom. This same effect is seen in many other animals, including various common pets – hamsters, gerbils, and budgerigars (parakeets to Americans), all have the same “breed as soon and as often as you can” strategy, which explains why they were domesticated so quickly. 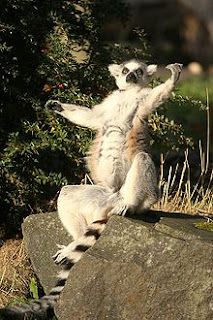 Anja however is not the only site revealing new information on Ring-tails. More or less in the centre of the Ring-tails range lies the central massif of the Andringitra mountains, which rise to nearly 3,000m. At the peaks, the forests of the lowlands are replaced by heath, and at night in the coldest months temperature regularly fall below zero and even snow falls occasionally. A more unlikely place to find warmth-loving lemurs would be hard to imagine, but even at the heights Ring-Tailed lemurs can be found, living amongst the granite precipices. For obvious reasons they have been little studied, but although they appear somewhat fluffier than lowland individuals, and have fur bleached by the strong sunlight, they appear identical. Studies of their DNA indicate they are not genetically distinct from lowland animals.

Professor Gould's homepage is here: http://web.uvic.ca/~lgould/
Posted by Alan at 12:15