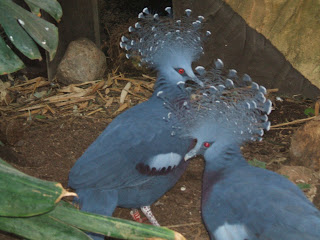 In the Forest of Birds here at Bristol we have a pair of the most spectacular (and since the demise of the Dodo, largest) of all the pigeon family, Victoria Crowned Pigeons Goura victoriae. One of three species of Goura that may be seen in zoos worldwide, Crowned Pigeons originate from New Guinea. All three species overlap in parts of their ranges, and hybridize both in the wild and in captivity, so whether they should be classed as subspecies or full species rather depends on the taxonomist concerned. The three forms are however quite distinctive in appearance, so are probably best treated as separate species, and are managed separately in studbooks. The other two species are the Blue or Western Crowned Pigeon G. cristata, which comes from western New Guinea and related islands, and Scheepmakers Crowned Pigeon G. scheepmakeri, from along the south coast of New Guinea. The Victoria Crowned Pigeon mirrors the distribution of Scheepmakers pigeon in northern New Guinea.


All three forms have a similar habitat preference – usually low lying, and always dense, rainforest and mangroves, reaching to elevation of perhaps 500m in some parts of their range. They feed on the ground, mainly on fruits, seeds, and soil invertebrates, which they locate by flicking their beaks in a characteristic manner as they turn over the leaf litter. The nest is usually within 10m of the ground, and is a typically flimsy pigeon nest. There is usually only a single chick, which leaves the nest when it is still much smaller than the adults, although fully able to fly. They are fairly sociable birds, and flocks of up to 30 individuals have been reported.

All three species, particularly Scheepmakers, are classed by the IUCN as Vulnerable as a result of hunting (none are now found close to villages), logging which destroys their habitat and reduces the remaining forest to fragments which cannot sustain viable populations. They are also caught for the wildlife trade.

All three species of Crowned Pigeon can be found in zoos worldwide, where they always attract attention. Unfortunately the breeding record is not at all good, although the birds themselves are very long lived – over 30 years has been reported. The reason for the poor breeding success is unclear, although they appear to react badly to disturbance or rearrangement of their enclosures. Another likely suspect is diet – like all too many animals there is little known of the wild diet. The current status of the captive populations, according to ISIS, is as follows: 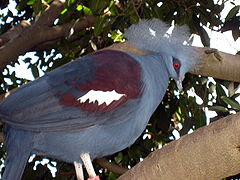 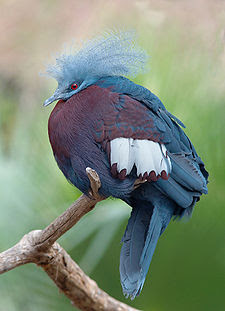 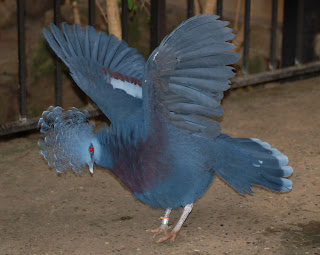 The only comparison that has been possible so far involved investigation of the crop contents of four wild birds taken some months after the breeding season. This showed a much higher content of fibre in the diet, and higher levels of protein. Estimating insect or mollusc prey is difficult, and is likely to be quite high judging from their feeding behaviour. Research on the ecology of the wild birds is urgently required to enable better husbandry guidelines to be produced. The present state of knowledge can be found in the Crowned Pigeon husbandry manual, available online at the Rotterdam Zoo website here:

Next week I will discuss one of tropical pigeon we have been most successful with – the Nicobar Pigeon. Among its other distinctions it is believed to perhaps the closest living relative of the Dodo.

(images from Wikipedia)
Posted by Alan at 11:50