Pigeons of Bristol 4: Almost a Dodo 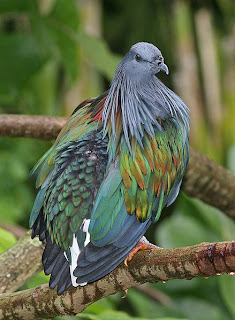 One of the most distinctive pigeons to be seen in the Forest of Birds here at Bristol is our group of Nicobar Pigeons, Caloenas nicobarica. This is a very distinctive bird, with a greenish iridescence (especially on adult birds) and long feathers on the neck which give rise to its alternative name of Maned Pigeon.

It is an island specialist, breeding in colonies on fairly small off shore islets and flying to larger islands to feed on the ground. The diet is seeds, fruit, and probably some invertebrates. It is fairly tolerant of human activities, and will visit fields to feed on grain. Unlike most pigeons, it has a single large stone in its gizzard which it uses to grind up food items.

The current range of the Nicobar Pigeon is quite broad, extending from the Andaman Islands in the east as far as Palau in the west, including of course the Nicobar Islands east of Thailand. It is the only living species in the genus, but two other forms are known. New Caledonia held a larger species, Caloenas canacorum, which was probably hunted to extinction by 500BC. Another species, the Liverpool Pigeon, is known only from specimens without an identification locality from the 19th century. It may still survive, but is far more likely to be extinct. Information on the Liverpool Pigeon, and the last surviving specimen, can be seen here: http://www.arkive.org/liverpool-pigeon/caloenas-maculata/

One of the most important features of the Nicobar Pigeon is that some DNA analyses place it as the closest living relative of the Dodo and Solitaire of Mauritius and Rodrigues in the Indian Ocean. While these are many thousands of miles from the current range, at times of low sea level many ocean shoals would have appeared above the sea, providing good habitat for an island-loving specialist like Caloenas. Having said that, the relationship does not appear to be especially close – the ancestors of the Dodo seem to have diverged many tens of millions of years ago from the other Asian pigeons. Nonetheless, a terrestrial, seed-eating pigeon is a good model for the ancestral Dodo, and reports indicate that the Dodo had a single gizzard stone just like modern Nicobar pigeons.

Nicobar pigeons breed fairly well in captivity, and ISIS lists well over a thousand in zoos worldwide. There are also a large number in private hands. They lay a single egg, and as with other pigeons the young are fed on “crop milk”, which is rich in protein, fats, and minerals, just as with mammalian milk. They can breed several times a year and can live up to 20 years. Bristol breeds several every year from our flock, which are distributed to other collections.