Year of the Gorilla Part 1 - How many apes?

As 2009 is the Year of the Gorilla, I thought it would be a good idea to run some posts during the year on gorillas, their conservation, and interesting features of their biology. To start with, we need to define what we are talking about, so I will commence with a brief post on their classification:

Ask the average member of the public to name the different apes and most people will list the gorilla, chimpanzee, and orang-utan. A few will add the bonobo, and some will add gibbons to the list. If you ask a taxonomist the same question, the answer you will get is “at least 20”.

So why the difference?

First of all, there is no such animal as “the” gibbon. The gibbons are a widespread and quite diverse group of at least 14 species, many with several subspecies, ranging across Southeast Asia and Indonesia. Aside from differences in size and coat colour, gibbons are all very similar in their means of locomotion, which conceals a considerable genetic diversity.

Also in South East Asia, we have the two (yes two) species of orang-utan. The Bornean Orangutan, Pongo pygmaeus, and the Sumatran Orangutan, Pongo abelii, are actually quite different from each other – the estimated date of their separation is 1.5 million years ago. There was once at least one other species, the Mainland Orangutan, which ranged across Asian rainforests as far as southern China. It certainly survived up to the end of the last Ice Age, possibly more recently than that, and has been suggested as a source for the legends of the Yeti.


Moving to Africa, we have our closest living relatives, the Chimpanzee Pan troglodytes, and the Bonobo Pan paniscus. Bonobos in particular are highly threatened in the wild, and Chimpanzees are declining fast.


Finally, we are up to the two species of gorilla. Traditionally, all gorillas were classed in a single species, with the Mountain gorillas in Virunga national park in Ruanda placed in a separate subspecies to the lowland gorillas. However, with more study it has become clear that this taxonomy is out of date, and gorillas are two species, with considerable differences in their diet and social behaviour.

First, with a range centred on the Eastern Congo and Ruanda, we have the Eastern Gorilla, Gorilla beringei. This has at least two subspecies, Grauer's gorilla, G,beringei graueri shown here; 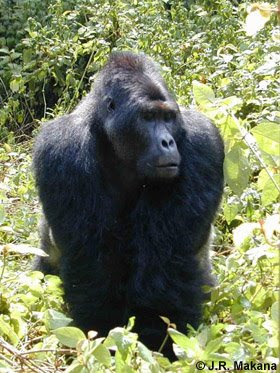 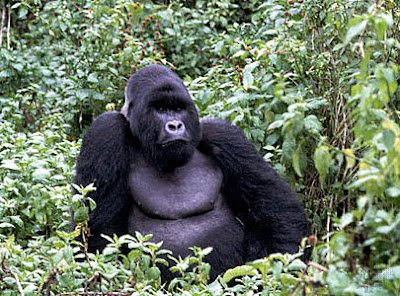 Not currently treated as distinct is the Bwindi Gorilla, which is regarded as the same subspecies as the Mountain Gorilla but which looks quite different, howver this may be because it lives at lower altitudes and so does not grow the distinctive long hair of the Mountain Gorilla. 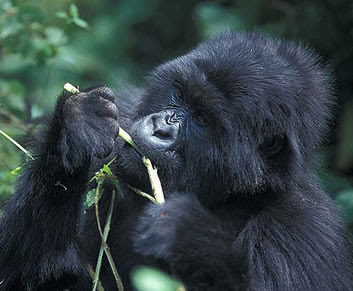 Moving westward, we have the other species of gorilla, the Western Gorilla. Most threatened of all great ape taxa is the Cross River gorilla, Gorilla gorilla diehlii, with a population of under 250 which is split into several patches of fragmented habitat surrounded by famland. Bpth subspecies of Western Gorilla can be distinguished by the brown hair on their heads - Eastern Gorillas are black headed. This can be easily seen on this female Cross River Gorilla: 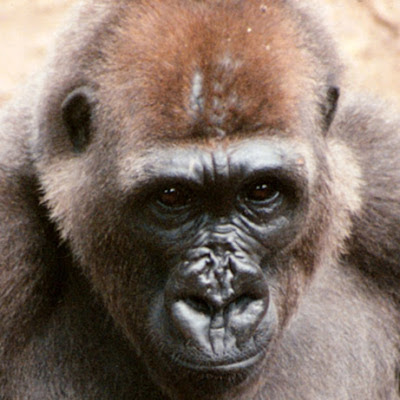 Finally, we have the Western Lowland Gorilla, Gorilla gorilla gorilla. Thanks to recent discoveries, it appears that there are far more of these than was thought – the world population may be over 200,000. These are the gorillas that are seen in zoos – the ones shown here are two of Bristol zoos gorillas, Salome and Komale.

Next time, conservation actions and news from Africa - the Bristol connection