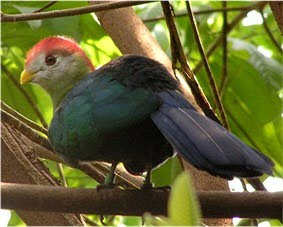 Living in African rainforests, and with a few species in more open country, is a group of mostly highly colourful, fairly large, arboreal birds, the turacos. Despite their African origins, several species occur at fairly high altitudes, and they are less susceptible to cold in captivity than one might think. They appear to be alert and curious, and I have seen several used in flying displays.

They are fairly widespread in captivity, both in zoos and private breeders, and a few species, such as the White-Cheeked, are semi-domesticated, with a few colour mutations being bred. However, other species are far more difficult to breed and are rarely if ever seen. Most species are not threatened, although some forms are localised and may be at risk from deforestation.

Turacos are currently classified in over 38 distinct taxa, currently grouped into 22 species in 6 genera, with the majority in the large Green Turaco genus Tauraco. They are a fairly distinct group, but appear to be closest to a group of “near passerine” birds including the cuckoos.

There is a very odd feature of turaco colour – whereas in almost all birds green colour is a structural effect, resulting from the structure of the keratin in the feathers, in turacos the colour is due to a green pigment. This can be extracted from the feather with a weak alkali solution.

Most turacos are week fliers, preferring to run or hop through the branches with only short glides, although they are capable of powered flight. More open country species, such as the Go-Away birds Corythaixoides, are stronger fliers. As such, turacos are an interesting model for early birds, as these are also believed to have been week fliers with similar means of getting around in the trees, although turacos themselves are fairly advanced birds.

Turacos are mainly fruit eaters, although some species also eat surprising amounts of foliage, and a few species take at least some insects, especially when rearing chicks. They will also eat flowers. They seem to have a fondness for banana – in fact one genus, Musphaga, actually means “banana-eater”.

In captivity they are fed chopped fruit, an artificial diet for softbills (“softbill” is an avicultural term for non-seed-eating birds), plus some leafy vegetables such as broccoli and lettuce. Many keepers also provide seasonal wild fruits such as blackberries.

They are fairly territorial, although territory size in the wild is unknown, and in captivity are usually kept either singly or in pairs. Flock behaviour in the wild does not appear to occur.

Turacos make an open, cup-shaped nest with two eggs. In captivity they readily take to nesting baskets, which may mean that in the wild they also re-use other birds’ nests. The chicks hatch after approximately 22 days and grow rapidly, leaving the nest at two weeks, although at this point they cannot fly.

Bristol Zoo currently has one paid of Red-Crested Turacos (picture at top from Wikipedia) on show. Unfortunately the aviary is not a walk-through, as you need to see the birds in good light to appreciate their beauty. They are in the aviary just before you enter our Butterfly House – if a reader is visiting Bristol Zoo please check them out. There has recently been a stud book set up, managed by Cotswold Wildlife Park, which has several species of Turaco on show, including the largest species, the Great Blue Turaco, which is Toucan-sized.

For more information on turacos, see the International Turaco Society website http://www.turacos.org/
Posted by Alan at 13:40